New Evidence of Where Life Might Exist on Mars 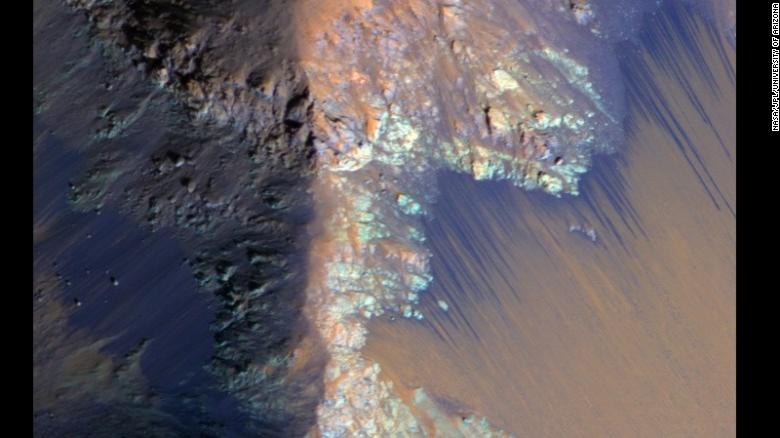 (CNN)Life could exist in isolated pockets beneath the surface of Mars, according to Alfred McEwen, principal investigator of NASA's HiRISE high-resolution camera aboard the Mars Reconnaissance Orbiter. While they would most likely be primitive microorganisms such as bacteria, it would still be proof of life outside of our own planet.

"Life subsists deep underground on Earth, and on Mars, if you go a kilometer deep, there are surely still pockets of water," he said.
"Given the complexity of planetary crusts, the evidence for geologically recent water raised to the surface, and the geothermal gradient that should be warm enough for water," explained McEwen, "if life ever existed on Mars, why wouldn't it persist in at least isolated pockets underground? That's what I think is likely to exist on Mars in terms of life today. I still don't think it's habitable right at [the] surface, given the radiation and that the water is transient and very salty."
McEwen's estimation is based on his research studying and analyzing the Martian surface over the last five years. He was part of the team that confirmed the presence of liquid water on Mars in 2015. McEwen was also on the team that discovered the unique and mysterious seasonally dark streaks on Martian slopes, referred to asRecurring Slope Lineae (RSL), that helped to confirm the presence of water in the form of hydrated salts on Mars.
For that reason, researchers have been using data from HiRISE and the Orbiter itself to learn as much as they can about these RSL. A new study took a closer look at thousands of RSL in the largest canyon system on Mars, Valles Marineris. It is also the largest canyon system in the solar system. By comparison, our Grand Canyon would be a "tiny tributary" next to it, according to lead study author Matt Chojnacki.
RSL only appear as seasonal flows or lines on canyon ridges and isolated peaks during warm seasons on Mars. Given Valles Marineris' location along the Martian equator, it's highly unlikely that these would be caused by melting ground ice. Their dark lines sweep down the slopes, only to fade during colder seasons. And because hydrated salts were detected there, they provide the best possible evidence for where life could exist on Mars.
Hydrated salts, which are bound to water molecules, are comparable to the salt on the beach of the Dead Sea, rather than table salt. They help to lower the freezing temperature of water, which means that this water is likely a very salty liquid brine. To be drinkable for an astronaut on the surface, it would have to be desalinated.
"But what's the origin of these RSL?" McEwen said. "They start at the top of isolated peaks and ridges. It could be subsurface water that seeps out as water vapor and that water is then trapped by the hydrated salts. Maybe that is a clue as to where this life or water is."
Chojnacki, McEwen and the rest of their team also suggest that water pulled from the atmosphere by salts could be the culprit for forming liquid brine on the ground.
Building on previous research released over the last two years, Chojnacki and his team made several new discoveries about the RSL. Bright streaks were discovered next to the dark seasonal RSL, which they believe could be salt left behind after evaporation of what produced the previous RSL.
"They almost stain the surface and leave a mark, but it's brighter than the RSL," Chojnacki said. "It's like a chemical change occurring on the surface."
The team also estimated how much water would be needed to create these thousands of seasonal streaks, which could hold a volume sized between 10 and 40 Olympic swimming pools. And even though the amount of water vapor about the canyon region is larger than that, questions remain about a process that would be strong and efficient enough to bring that water to the Martian surface.
Another exciting discovery revealed that the RSL aren't just superficial changes, but could actually cause slumps and topographical changes in the slopes themselves. These changes occurred seasonally, at the same time as the streaks.
"As the dark streaks lengthen and fade, we saw a small number of topographic changes," Chojnacki said. "There were slumping events where indentations in the slope occurred. We even saw the hint of tiny little gullies forming, which is indicative of surface flow."
McEwen, Chojnacki and their colleagues will continue to study these RSL in hopes of discovering more answers. What they learn could inform future missions concerning the Red Planet.
"McEwen and [Lujendra] Ojha have shocked the world with revelations from HiRISE about RSL and the evidence for flowing water on Mars," Chojnacki said. "Five years in, we've made strides and answered questions, but now we have so many more. We're excited to continue looking for more topographic changes and model them to find out what's causing these RSL."
Share this article: