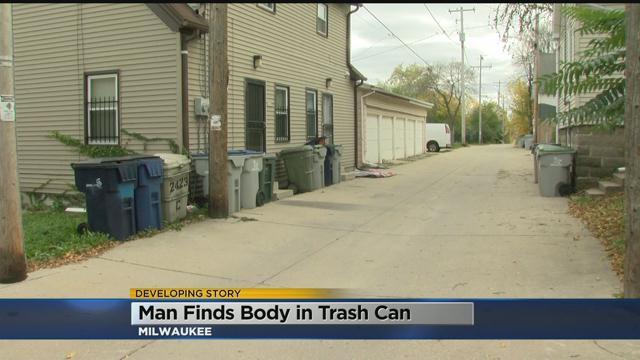 A neighborhood in Milwaukee is on edge after the discovery of a body in a trash bin.

Neighbors near the alleyway where the body was found say investigators were out in force canvassing the neighborhood.

CBS 58 spoke with a man who claims to have found the body.

He said he was searching for aluminum cans-but found something terrifying instead.

Milwaukee Police said an adult male’s body was found in a trash can on the 2400 block of North Holton Street around 6:30 Thursday night.

A neighbor, who declined to go on camera said when he opened the trash can, he saw a body-folded in half and wearing only a pair of boxers.

There have been rumors in the neighborhood that the body was missing a head and hands, but police told us the body was not decapitated.

Neighbors said police spent the night searching thru their yards.

They are wondering if this is somehow connected to two prior incidents. On June 4, two men were found dead in an alley on 21st and Atkinson; one in a garbage cart.

On June 11, another man’s body was found in a trade in near 5th and Wright.

CBS 58 asked MPD of these cases are connected and they said they had no further information.