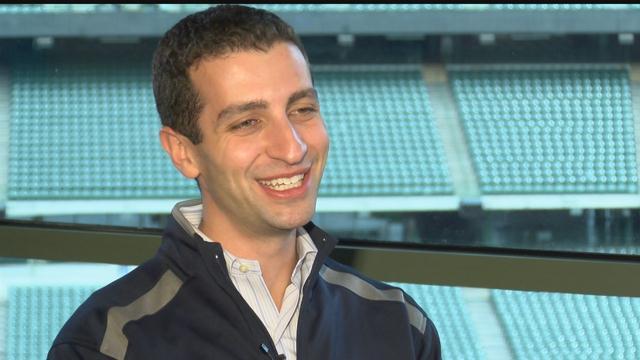 New Milwaukee Brewers GM David Stearns has hit the ground running. "If you had told me a month ago that we would have made three trades... in the past three days, I wouldn't have thought that likely," Stearns said.

Part of the reason Stearns was hired back in September was that he is known as a "numbers guy," but one number really drew the attention of fans-- 30. At age 30, Stearns is one year younger than outfielder Ryan Braun. Stearns says all the attention paid to his relative youth is understandable. "I certainly expected it when I came into this position," Stearns said, "knowing that I was going to be the youngest person currently holding the job. Having said that there are people who are multiple years younger than me who have held the job previously who have done a really good job."

Both Theo Epstein and Jon Daniels were hired at age 28. Both men have built rosters that went to the World Series. "If I can follow that track and have that kind of success here I'll certainly be happy with that," Stearns said.

Stearns was Assistant GM for the Houston Astros for the past three years. While they enjoyed a breakout 2015, they lost a combined 209 games in the 2013 and 2014 seasons. Can Brewers fans expect the same kind of complete rebuild? "I don't really get myself caught up in terms like retool or rebuild or reposition, because frankly it doesn't change objective and my goal. My goal is to continuously add young talent to the organization," Stearns said, "I don't think you can just copy and paste a plan from one organization to another. I think each organization is different, and we're starting in a different place than what the Astros were starting from."

Stearns graduated from Harvard in 2007. He says he was a political science major, because you can't major in baseball at Harvard. He stayed at Kirkland House, a year behind Facebook founder Mark Zuckerberg. Sadly, Stearns has nothing on Zuckerberg that we couldn't find out from watching "The Social Network." "My guess is that we crossed paths at some point, it was a relatively small house to live in, but I didn't have any sort of personal relationship with him," he said.

After graduating from Harvard, Stearns worked for the MLB Commissioner's Office as well as the Indians, Mets and Pirates. Born in Manhattan, the Mets were his favorite team as a kid. "It was never really an option. I grew up into a family of Mets fans, so I followed suit and spent a lot of great times at Shea Stadium growing up," he said.

So what kind of baseball man is David Stearns? He prefers a pitchers' duel to a slugfest. "I'm more of a purist and would rather see the crisp pitching and defense, and see the 1-nothing, 2-1 nail biter."

He says baseball doesn't need a salary cap, but is okay with instant replay. "It improved over the past couple of years and I think they did a good job with it," he said.

He prefers "small ball," but Stearns thinks the designated hitter is destined for the National League. "It may be an inevitability that the DH makes it's way over, but we may be a little while away from that," he said.

Stearns endorsed current manager Craig Counsell, saying he "is fully aligned with the goals of the Brewers organization." He also talks with former GM Doug Melvin "regularly," Melvin stayed on with the Brewers as a consultant. "He's probably seen a lot of the situations that I'm encountering as a first-time GM, so it's certainly comforting to have that resource available," Stearns said.

The Brewers lost 94 games in 2015, and are staring up at three talented teams in the Pirates, Cardinals, and Cubs in the NL Central. So the challenge ahead seems daunting. But Stearns assures Brewers fans that the wins will come. "I love baseball, and I love to win... that's a big part of who I am, and it keeps driving me to be better than the other teams," he said, "to produce an organization and a product on the field that makes your fans proud to be Brewers fans, that is what we are aiming to do."