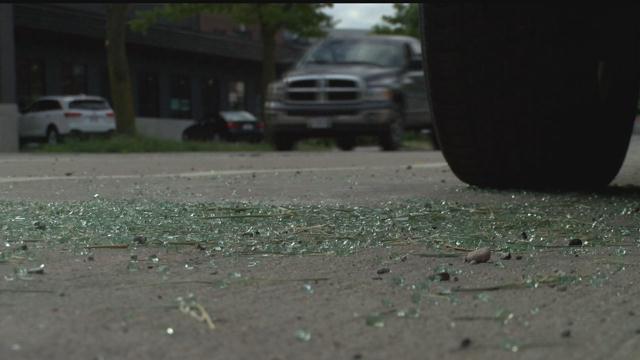 On the streets of Milwaukee's Third Ward, evidence of a criminal's unwelcome visit.

"There's a bunch of glass in the streets surrounding our apartments," said Alexa Herold.

Milwaukee Police said they're investigating several dozen car break-ins that happened during the overnight hours of Wednesday into Thursday. Target areas include south side neighborhoods and the Third Ward.

"Car stereo was taken out of a jeep and then like a car charger," Herold said.

Those items were stolen from cars of Herold's friends last summer.

Now that the crime has hit close to home again, she's reconsidering parking her car on the street versus the parking lot to save money.

"This is $65 a month and this would be $5 so it's a big difference," she said. "So I'd rather pay that but I definitely don't want to take the risk of losing my whole car."

Safety is top of mind for Stephanie Staszak too, who has to park blocks away from her performance at the Skylight Music Theatre.

"Making sure I don't have anything that would be worth trying to break into my car for," Staszak said.

It's a practice that's key to prevention.

There are cameras in the area, but it's unclear if they captured those responsible. Herold said seeing bike cops on patrol adds an extra level of security and awareness for others to be on guard.

"Hopefully it comes to an end," she said. "Hopefully they get caught for what they're doing."

No arrests have been made. MPD is working to determine if the car break-ins were committed by the same suspects.