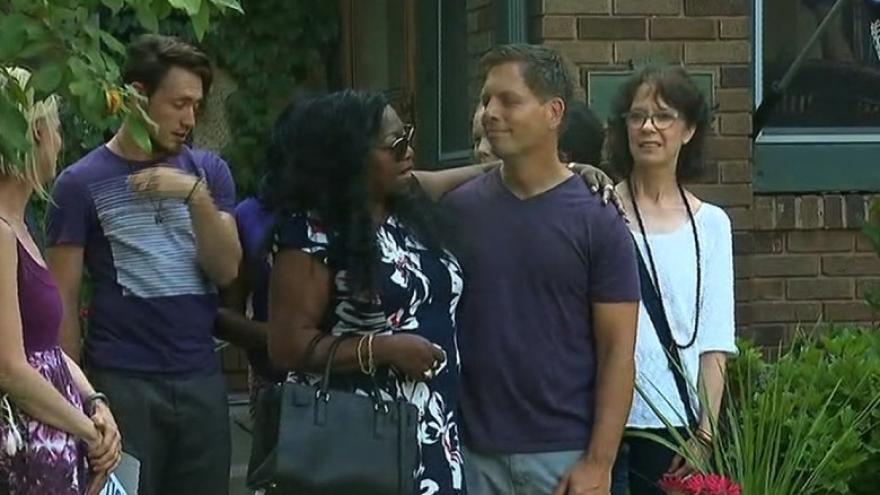 (CNN) Valerie Castile and Don Damond embraced each other minutes before the "Justice for Justine" rally in suburban Minneapolis.

A mother and a fiancé were bonded by two separate fatal police shootings that ignited outrage beyond Minnesota.

"They're beginning to understand this is not a black or white thing. This is a human being thing," Castile said at Thursday's rally protesting Justine Ruszczyk's death. "This is a humanity type thing."

Castile's son, Philando, was shot by police last July after being pulled over for a busted brake light. In June, the cop who shot him was found not guilty of manslaughter.

Damond's fiancé, Ruszczyk, was shot by police on Saturday after she called 911 to report a possible sexual assault near her home. The officers tried to call for medical help after she was hit, but it was too late.

For Castile, the moment was poignant.

Castile and Damond met for the first time Thursday outside his home just steps away from where Ruszczyk was killed.

They are forever linked to the same cause -- the search for answers from police departments reckoning with two high-profile shootings.

Minneapolis attorney Robert Bennett is representing Ruszczyk's family, including her relatives in Australia, as well as Damond. Bennett was previously co-counsel for Castile's family when they went through the legal process following Philando's death.

Bennett told CNN by email that the Ruszczyk family is looking for answers in all aspects of policing.

"The family is interested in justice in largest sense -- an unbiased, transparent investigation, necessary changes in police training, officer selection criteria and practice, proper and non- discretionary policies on usage of forensic tools, including squad and body cameras, swift and sure discipline and full and complete recompense."

Bennett told CNN he couldn't think of a situation where anyone would be afraid of Ruszczyk.

"You don't draw and shoot them across your partner," he said. "Loud noises in July is not exactly unheard of."

Bennett added communities can't "have a bunch of fearful police officers out there."

Castile's family reached a $3 million settlement last month. A joint statement on the settlement mentions the need for police reform.

"The important work of healing our community continues. The City of St. Anthony reaffirms its commitment to transforming its police department..."

While Ruszczyk's family awaits answers, Castile says she'll continue to support them through a process she knows too well.

"The spirit of my son led us over here," she said, "to speak with the family and march in this march today."

'This should not have happened'

"This should not have happened," Minneapolis Chief Janee Harteau said of Ruszczyk's shooting. "On our squad cars you will find the words: 'To protect with courage and serve with compassion." This did not happen."

The 40-year-old bride-to-be was at home Saturday night when she called the police to report a possible sexual assault she could hear outside her house.

"I can hear someone out the back and I, I'm not sure if she's having sex or being raped," Ruszczyk told the 911 operator with concern. "...I think she just yelled out 'help,' but it's difficult. The sound has been going on for a while, but I think, I don't think she's enjoying it."

She called again eight minutes later when the police still hadn't showed, but was assured officers were on their way.

Officer Mohamed Noor and his partner Matthew Harrity arrived on the scene. As they drove down the alley in their police car, Harrity heard a loud sound that startled him, the officer told Minnesota Bureau of Criminal Apprehension.

That's when Ruszczyk approached the car. Noor, sitting in the passenger seat, fired his gun at Ruszczyk through the driver's side window.

A little more than a year before Ruszczyk's killing at the hands of police, Philando Castile was driving with his girlfriend and her daughter when he was pulled over in Falcon Heights, nearly 9 miles from Minneapolis.

Police video of the encounter shows a routine stop for a broken brake light.

The officer asked for his license and insurance. Thirty seconds into the conversation, Castile begins to tell Yanez that he has a weapon.

"I'm not pulling it out," Castile said.

After a brief back and forth about not pulling out the weapon, Yanez drew his gun, firing seven shots into the car.

In June, Yanez was found not guilty of second-degree manslaughter.

"My son loved this city and this city killed my son," Castile's mother said after the verdict. "And the murderer gets away! Are you kidding me right now?"

She added that Yanez's acquittal was a step in the wrong direction for everyone.

"We're not evolving as a civilization, we're devolving. We're going back down to 1969. What is it going to take?"

Following Castile's shooting and Yanez's subsequent not-guilty verdict, protesters took the streets, outraged over the killing of a man who they believed didn't do anything wrong.

On Thursday, the same outrage roared through the streets of Minneapolis as hundreds came together to demand "Justice for Justine."

The protesters chanted "prosecute the police, no justice, no peace," in the same tone many had chanted "black lives, they matter hear" just a year earlier when Castile was killed.

"I was here last year, I watched 12 jurors say it's alright to kill black people in the streets," John Thompson, a friend of Castile's said. "We will not accept it anymore."

In June, after Yanez was found not guilty, community activist Mel Reeves said the problem is in the system itself.

"Philando Castile got victimized by the system. So we need to start asking a question about the system-- why is the system violent?" he said.

Neighbors in Ruszczyk's predominately white neighborhood addressed their own shattered trust in a fair policing system.

"People of color have been killed by police for far too long," one neighbor said. "It's way past time for me and other white people to wake up."

Castile said regardless of skin color, she knew another person would be killed by the police after Yanez was found not guilty.

"...like I said after the verdict they were going to kill again," she said. "And they have."