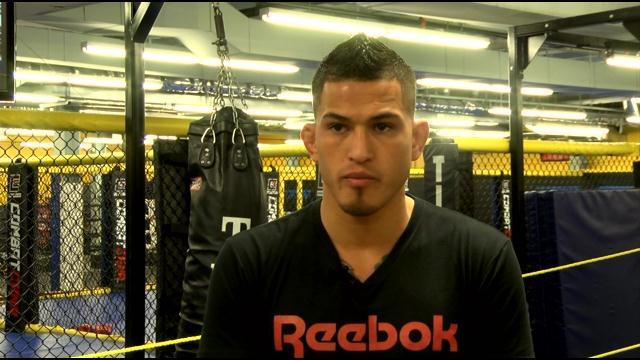 It's showtime again for Milwaukee fighter and UFC star Anthony Pettis. Not only is he heading to Las Vegas in a few days to defend his UFC title, but he'll also be making history soon.

The 27-year-old known for a \"showtime\" kick off the Octagon in 2010, will be soon known for being featured on the Wheaties box. This will be the first time in Wheaties' 91-year history that a UFC champ will be featured.

\"It's an amazing opportunity... something I never dreamed of as a kid... I wanted to be a professional athlete, but to be on a wheaties box? -it's crazy,\" said Pettis, who will be featured on the box January 2015.

Pettis says he could not be more proud of his Milwaukee roots, but growing up on the South Side of the city wasn't easy.

\"I lost my dad when i was 15 in a robbery, right across from my house in Milwaukee. I'm no stranger to how milwaukee can turn bad quick,\" Pettis said.

But he managed to stay out of trouble. At an early age, Pettis became fascinated with Tae-Kwon-Do. His mother had to raise him and his two brothers on her own, but Tae-Kwon-Do kept them busy.

\"At 5-years-old we were kicking and punching... not really knowing what it was going to lead to. We kind of fell in love with the sport,\" said Pettis.

It's that love for the sport and the support from family and his home team at Roufusport Mixed Martial Arts Academy that motivates him on a daily basis.

\"We have a great culture coming out of this gym... there are great fighters coming out of Milwaukee,\" Pettis said. \"We made our hometown a mecca for UFC.\"

Pettis has been out for a year because of knee surgery but he is now back and ready for the next gig in Las Vegas.

\"This fight means the world to me... it's probably more important than me winning the title,\" Pettis said.

Pettis will make his first UFC title defense at UFC 181 on Saturday, Dec. 6 in Las Vegas.