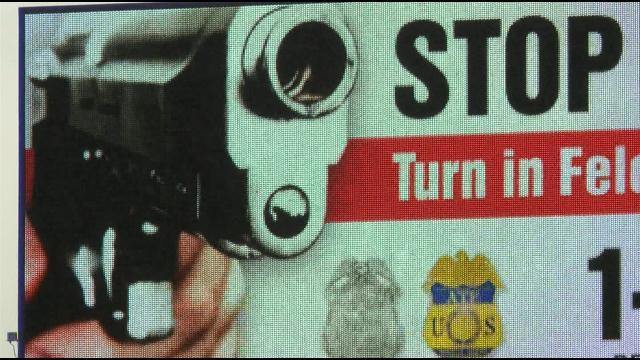 \"Our non-fatal shootings are up, the victims are up, our gun-related homicides are up,\" Milwaukee police chief Ed Flynn said during a press conference. \"Here is a simple way to get that crime gun out of your house.\"

Flynn pointed to the new digital messages from the ATF popping up on ten Clear Channel billboards along Milwaukee County freeways. The signs direct people to turn in \"felons and drug dealers with guns\" by calling 1-800-ATF-GUNS, an anonymous tip line.

It's similar to efforts Mayor Tom Barrett pushed for last summer, which featured a city-run tip line that allowed people to call in illegal guns (414-335-GUNS).  Through the first month of that campaign, the city received several dozen calls but no solid leads.

\"We don't want grandpa's musket, but if someone has knowledge of a firearm that is within reach of, so to speak, some young person who's used it in other crimes... This is a good opportunity to get rid of it,\" Flynn said.

Clear Channel donated the ad space, which the company says will reach more than one million people a day combined.

\"We live here, we want to make a difference in the community and we're sure that it will help,\" Milwaukee Clear Channel Outdoors president David Ford said.

The ATF calls the campaign just a piece of an overall effort to reduce gun violence across Milwaukee, where 52 people have been killed in violent crimes since new years day -- many by gun violence.

\"We need members of the community to call us and become our eyes and ears,\" Lee said.

Dent believes people living in crime-filled neighborhoods will call anonymously given time, but he says most of those people don't drive and won't see the signs.

\"Who is your target audience,\" Dent said police and the ATF need to ask themselves. \"If you're trying to get the inner-city, you got to also expand your message.\"

The billboards will stay up through the summer months.