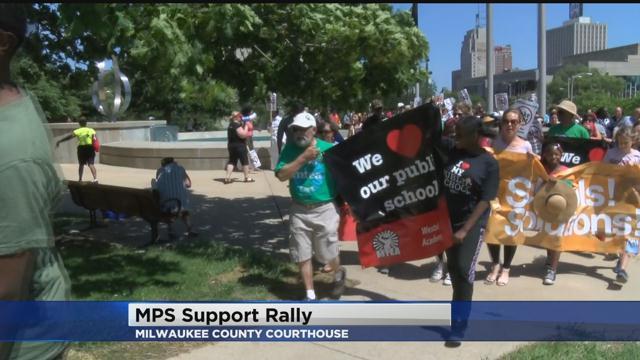 Students, parents and teachers marched around the Milwaukee County Courthouse Monday (June 20) to send a message that they don’t want anyone outside of the school district to manage their underperforming schools.

They chanted “Who’s community, our community” and “This is what democracy looks like.”

A recent state law requires Milwaukee County Executive Chris Abele to appoint a special commissioner to be in charge of a program designed to help underperforming milwaukee public schools.

Ingrid Walker-Henry is the co-chair of Schools and Community United.

Walker-Henry said they want the state law to be repealed.

“I don’t agree with takeover in any shape or form because it’s taking a voice from the community and I think we can fairly say the community is targeted,” she said.

Chris Abele said he wants the school district to agree on the terms of his proposal in order to move forward.

“I think the easiest thing and probably more productive for all of us to do is the sooner we can stop arguing about what could be better about a law that none of us made and agree here, the sooner we can work together on ways to improve the system,” Abele said.

Abele said this is a state law and it’s not his choice to not implement it.

“I’m hoping that as soon as we decide we’re not across the table from each other, we can be allies and work together, the sooner we can focus on bigger issues, which is funding from the state for public schools in general,” Abele said.

The school district came out with a list of concerns it has with Abele’s proposal. Click here to read them.

Abele said they plan to meet with the school district on Thursday.