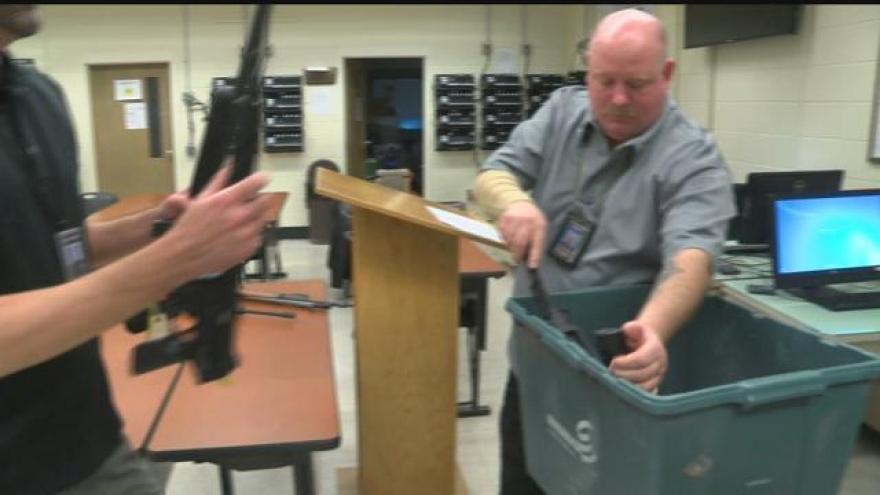 Mayor Tom Barrett says Milwaukee's police officers are often "outgunned" on the streets during a Sunday press conference highlighting new statistics about the number of illegal firearms seized in 2016.

Officer Chad Boyack is assigned to the anti-gang unit at the District Five station. He shows off just a few of the guns already seized in 2017.

Sitting on a table in front of the podium sat a pistol with a barrel clip, sawed-off rifles and shotguns, and an AK-47.

Meeting people carrying these weapons illegal is a realities of Boyack's job that he doesn't always tell his wife.

"She doesn't like to hear the stories and I understand. But if she asks me about any particular one I will tell her. But I know she doesn't want to worry as much," Ofc. Boyack said.

"In the first 47 days of this year the Milwaukee Police Department recovered 337 guns. That's an average of seven guns a day," Mayor Barrett said.

A wider look at crime statistics give even more insight. According to a recent crime study completed by the University of Chicago, Milwaukee Police recovered far less illegal weapons in 2016 than larger cities including Philadelphia and Chicago.

However, by comparing population sizes it's clear that Milwaukee Police are seizing more guns per person.

Mayor Barrett is calling for more support - including funding - from the legislature, and a new law that he says has bipartisan support.

"A law that would make having a gun a felony is someone has three misdemeanor convictions in five years. This is the habitual criminal legislation that Chief Flynn has been talking about for many years," Mayor Barrett said.

"Twelve hours ago, Officer Malone and I, we stopped a guy, he had a gun on him. And he actually was a felon for homicide. He killed a person in 1997. So, he's still out there," Ofc. Boyack said.

According to the 2016 crime statistics for Milwaukee, 83% of homicides were firearm related. Milwaukee police have seized more illegally possessed guns every year since 2011.