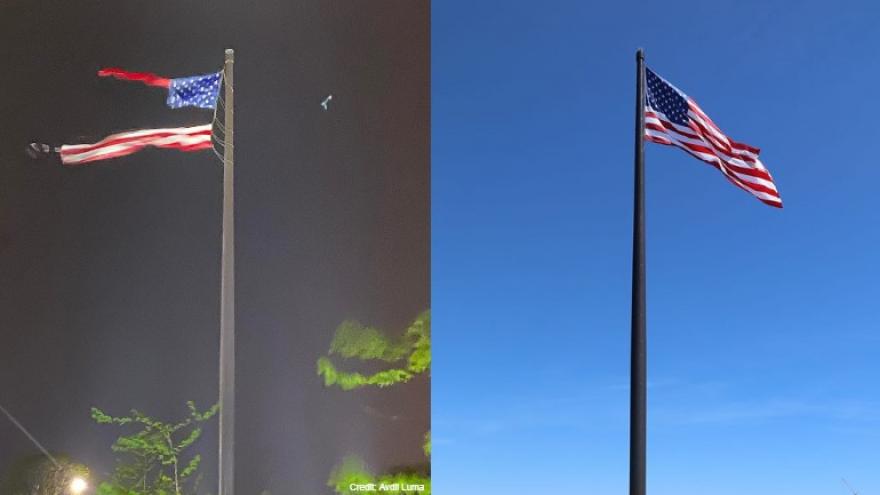 SHEBOYGAN, Wis. (CBS 58) -- The giant flag outside Acuity insurance in Sheboygan was destroyed in a storm overnight Tuesday, June 2.

Viewer Avdil Luma captured a photo of the flag tattered and torn down the middle.

According to an Acuity spokesperson, around 9:15 p.m Tuesday night, a gauge on top of the flagpole captured wind gusts of 90 mph. Around 10 p.m., the flag facility team started seeing social media posts regarding damage to the flag.

By 10:23 p.m., a crew of five had assembled and got the damaged flag down. They waited for weather to calm down before they could get the replacement flag up Wednesday morning.

This is not the only flag Acuity has. Acuity says they have six flags in rotation, and as they get to the end of their life they replace them.

The flags typically fly for 120-130 days. This flag in particular was at 120 days; Acuity was getting ready to retire it.

All of the damaged pieces were recovered and secured. Acuity works with the local VFW to hold a proper retirement ceremony for the flag, which they plan to do with this one.

The flag facility team takes great pride in their work. They've improved the maintenance and improved flag lifespan from 60 to 120 days. Acuity also works with a local seamstress if there needs to be any repairs. Obviously, this flag was beyond repair as it was at the end of its lifespan.

The flags fly on a flagpole 100 feet taller than the Statue of Liberty. It's the world's largest free-flying flag. Covering almost 10,000 square feet, the flag weighs well over 300 pounds and each stripe is over 5 feet high.