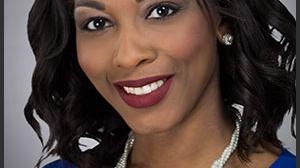 Marshanna Hester is proudly working for you as the 9 p.m. co-anchor on the CBS 58 News at 9 on WMLW and as an evening reporter. She joined the team in March 2014, reporting for the CBS 58 Morning News.

Marshanna comes to Milwaukee after more than two years in Peoria, Illinois. There, she served as an anchor/reporter and played a critical role in the station's wall-to-wall coverage of the devastating November 2013 tornadoes and historic April 2013 floods.

However, she is no stranger to severe weather. Marshanna called Topeka, Kansas, a part of tornado alley, home for more than five years as an anchor/reporter. In that time, she had the privilege to be the only television reporter to travel to Guantanamo Bay, Cuba with the Kansas Air National Guard, as guardsmen prepared to help those affected by the 2010 Haiti earthquake. She's been recognized for her work with awards from the Kansas Association of Broadcasters.

A native of the Midwest, Marshanna is from the small town of Boonville, Missouri. In 2005, she graduated with her Bachelor of Science degree from the University of Kansas. An avid Jayhawk fan, Marshanna loves sports, particularly those on the college level.

In her spare time, Marshanna enjoys volunteering, going to the movies and spending time with her dog, Sam. She is also a proud member of Zeta Phi Beta Sorority, Inc.

Marshanna looks forward to telling stories that matter, meeting new people and getting involved in the Milwaukee-area community. So if you see her out and about, please say hello.