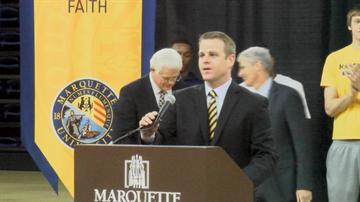 MILWAUKEE -- Led by university leaders and to the tune of the school's fight song, Marquette welcomed its new men's basketball  coach, Steve Wojciechowski.

\"We had many great candidates, many finalists and all of whom were head coaches, except for one,\" President-Elect Dr. Michael Lovell said at a press conference Tuesday afternoon.  \"That was Steve Wojciechowski and I hope that tells you how highly we think of him.\"

Wojciechowski comes from Duke, where he played from 1994 through 1998.  He returned in 1999 as an assistant coach and helped guide the Blue Devils to an 83 percent winning percentage and two national championships.

\"Steve has been to the top twice,\" Interim Athletic Director Bill Cords said.  \"He comes from a culture that expects, every time, to try to get to the top.\"

Wojciechowski formally agreed to terms Tuesday morning, a week and a half after Buzz Williams announced he was  leaving to coach Virginia Tech.  Wojciechowski admitted the last 24 hours were hectic.

\"Tears of joy, tears of sadness because we're going to be leaving a place that we love,\" Wojciechowski said.  \"But at the end of the day,  we kept coming back to it just felt right.\"

Wojciechowski spoke without notes and was witty at times.  He emphasized a commitment to strong defense, character  and hard work.

\"I'm the son of a longshoreman and a homemaker who didn't go to college,\" Wojciechowski said.  \"But what I learned from them is more important than what you could possibly learn in any classroom.\"

The hiring of the 37-year-old was a surprise to many, especially students on campus.

\"We've been a few weeks without a coach and for us to get a new coach is actually really rewarding,\" junior Aaron Maybin said.

\"I have amazing loyalty to [Duke] University and to Coach [Mike Krzyzewski],\" Wojciechowski said.  \"I can't wait to have that same loyalty to Marquette.\"