Man, Stabbed in Stomach Minutes Before, Proposes to Girlfriend 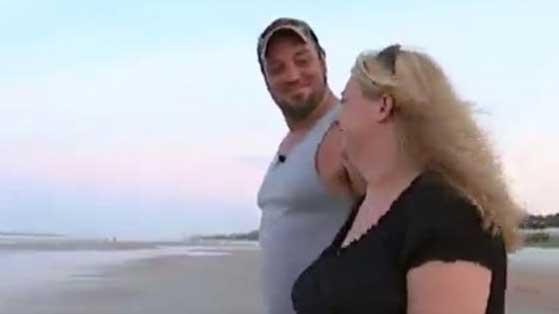 DAYTONA BEACH, Fla. (CBS NEWS)-- Firefighters were still cleaning up the blood at the scene where Steven Worthington was stabbed in the stomach Monday, when just feet away, Worthington struggled to get down on one knee asked his girlfriend to marry him, reports CBS affiliate WKMG.

Minutes before, Worthington and Allison Crowe were walking on a Daytona Beach pier when a man allegedly made crude comments to Worthington's 12-year-old daughter. Worthington and the man, identified by police as John Debow, began arguing.

"I pushed the man away, he pulled out a switchblade and proceeded to stab me in the stomach," Worthington said.

The men tussled and Debow fell onto his own knife. Worthington and Crowe, who are both nurses from Kentucky visiting Florida on vacation, say the incident happened fast, and they tried to help.

"The guy started to stand up and you can see the blood coming from his arms, and I say 'whoa whoa whoa,' tried to back up from it, tried to make sure he's OK," Crowe said.

Daytona Beach police made it to the scene soon after and arrested Debow, who was taken to a hospital. Police later charged Debow with aggravated battery.

Worthington had planned to propose to Crowe during the vacation, preferably on the beach, but while he sat in the ambulance the idea occurred to him to go for it right then and there.

"I got down on one knee and she actually was trying to help me back up," Worthington said.

The couple was so in the moment, they didn't even notice the still bloody scene. She said yes.

"The firemen were there and they were actually washing the blood away as I was on one knee asking her to marry me," Worthington said.

Laughing, the couple says it'll be an epic story for their grandchildren.

"It was a really, really big surprise and I'll never forget it. It's a story I'll be able to tell from here on out," Crowe said.