UPDATE: Man crashes into tree, dies, after fleeing from traffic stop on city's Northwest Side

UPDATE: Man crashes into tree, dies, after fleeing from traffic stop on city’s Northwest Side

UPDATE (CBS 58) -- Police have identified the victim in the fatal crash as Phillip Daniels, 31. The female passenger continues to be hospitalized for serious injuries.

The car was reportedly not stolen. Police investigation is ongoing.

A man is dead and his female passenger is in serious condition after his vehicle lost control and crashed into a tree Saturday afternoon on the city's Northwest side.

Milwaukee Police conducted a traffic stop of the 2007 Chevrolet near 58th and Appleton around 2 p.m. Saturday. Officers approached the vehicle, but it drove away at a high rate of speed northbound on N. 59th Street.

Milwaukee Police decided not to pursue the fleeing vehicle which lost control and crashed into a tree near 59th and Locust. The driver of the Impala, an adult male, was pronounced dead on the scene. His female passenger was seriously injured and is being treated at a local hospital. The crash happened near Michael Sledge's home.

"The whole block was tapped off," Sledge said. "There were all kinds of police cars and I walk to my house and I see a car wrapped around the tree. It's just crazy."

Sledge said while he feels sorry someone died, he hopes reckless driving in Milwaukee will stop. He witnessed a police chase pass by him just two weeks ago.

"If you did something wrong face the consequences, do your time, but you're still alive," Sledge said. "Now, you're dead someone else is injured and there's no coming back from that. Just senseless." 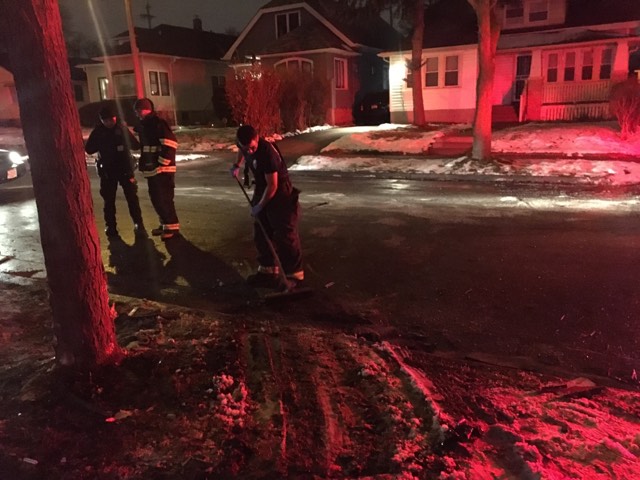 Firefighters clean-up debris after a car crashed into a tree Saturday afternoon on the city's northwest side. Evan Casey, CBS 58 News