Evening Update: A new wind chill advisory has been issued.

Evening Update: A new wind chill advisory has been issued.

A wind chill warning goes into effect Tuesday at 6 pm and lasts until Noon on Thursday!  Wind chills between -40 and -60 are expected.  The record wind chill for Milwaukee is -56 on January 10th, 1982! 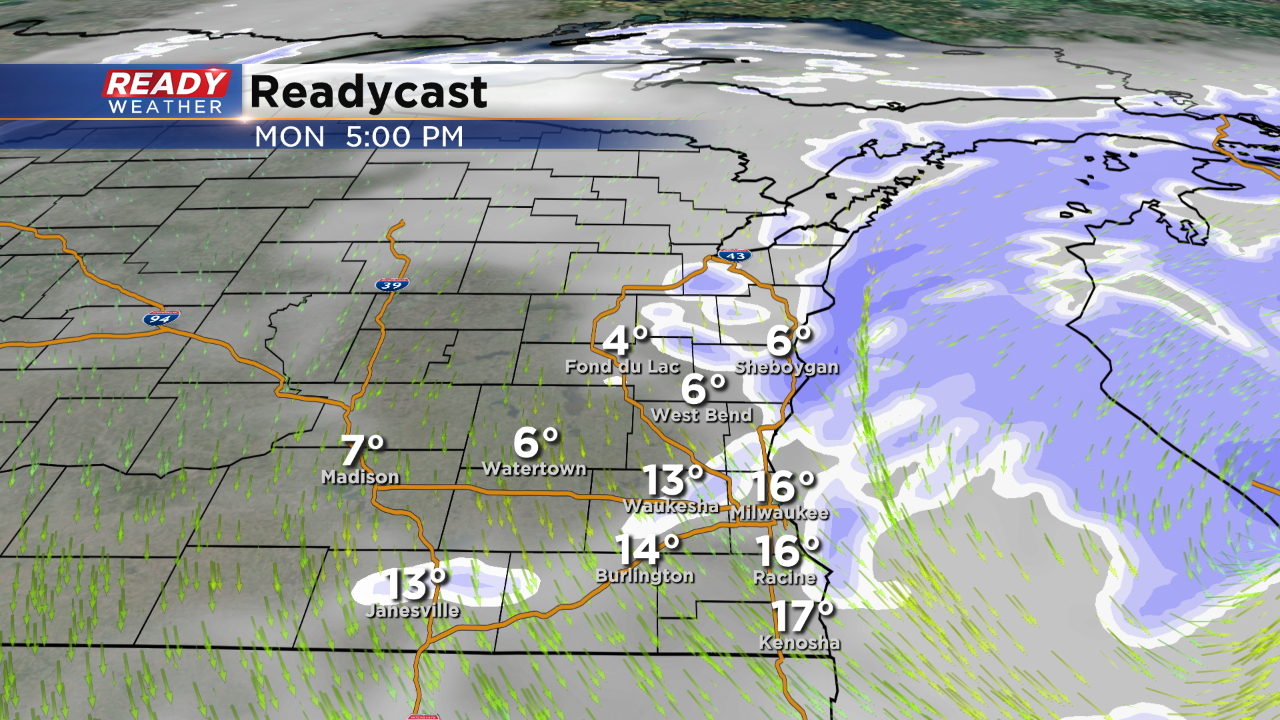 Snow showers are expected to continue through 6 pm, especially alogn the lake.  Another inch or so is possible before the winds shift and the snow moves out. 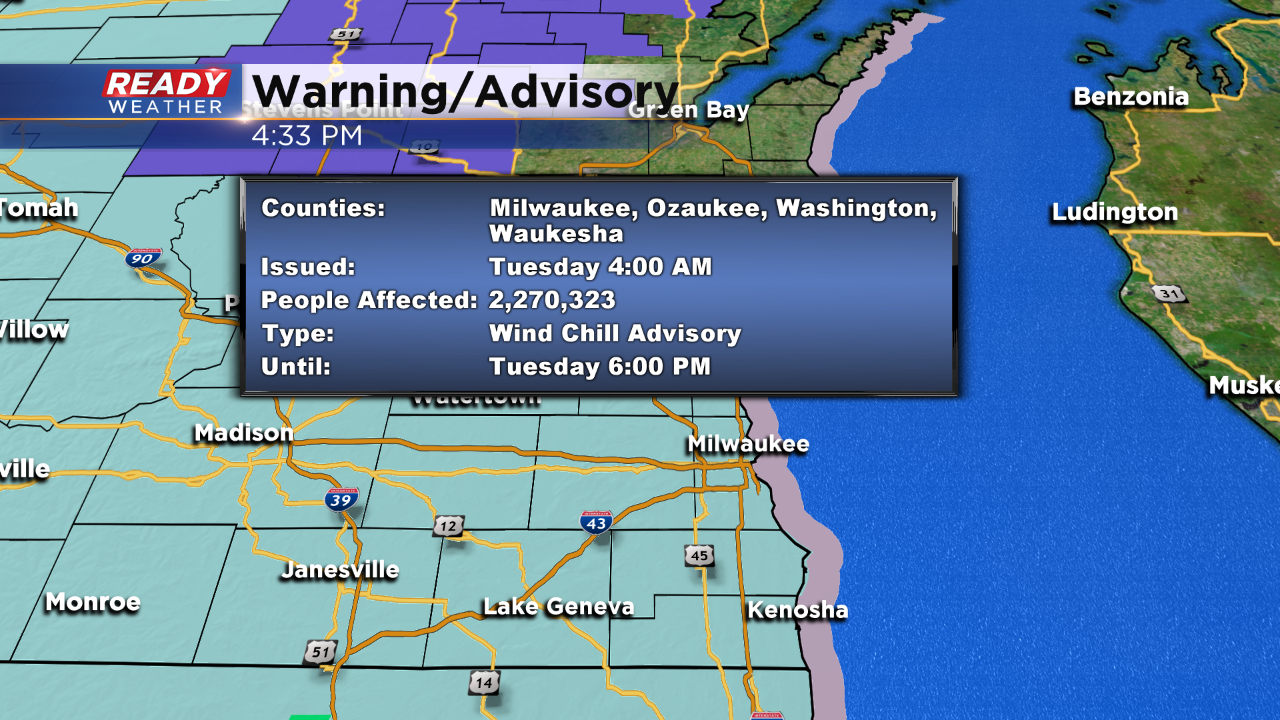 Later tonight the winds will pick up and blowing and drifting snow is likely.  Overnight temperatures will range from 0 to -15 degrees.  Wind chill values between -20 and -30 are expected.  A wind chill advisory will go into effect at 4 am and last through 6 pm Tuesday.  The advisory will be replaced by a wind chill warning for Tuesday night through Thursday morning!  Wind chills are expected to drop between -40 and -60 below. 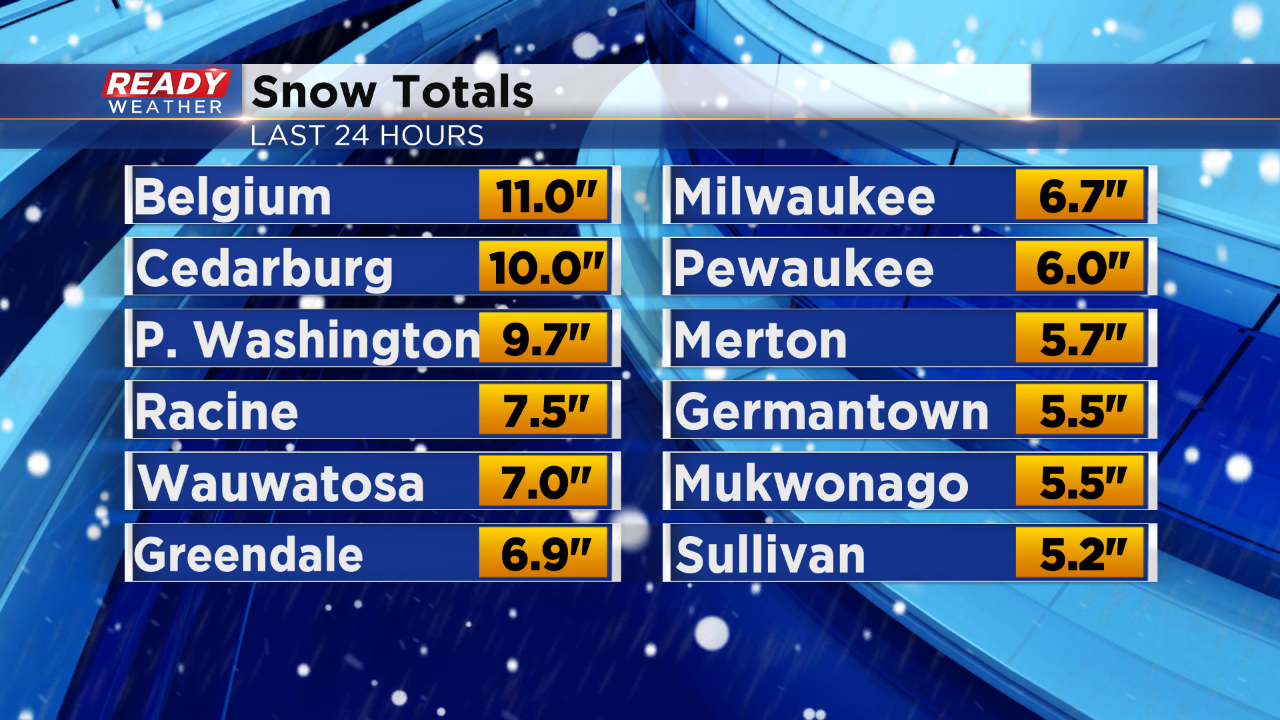 Heavy snow continues to fall across the area and will likely continue through 6 pm.  Low visibility and winds are creating some blowing snow.  This next round of snow could produce another 1" to 3".  Some lake enhancement is also likely.  That's on top of what has already fallen from this morning. 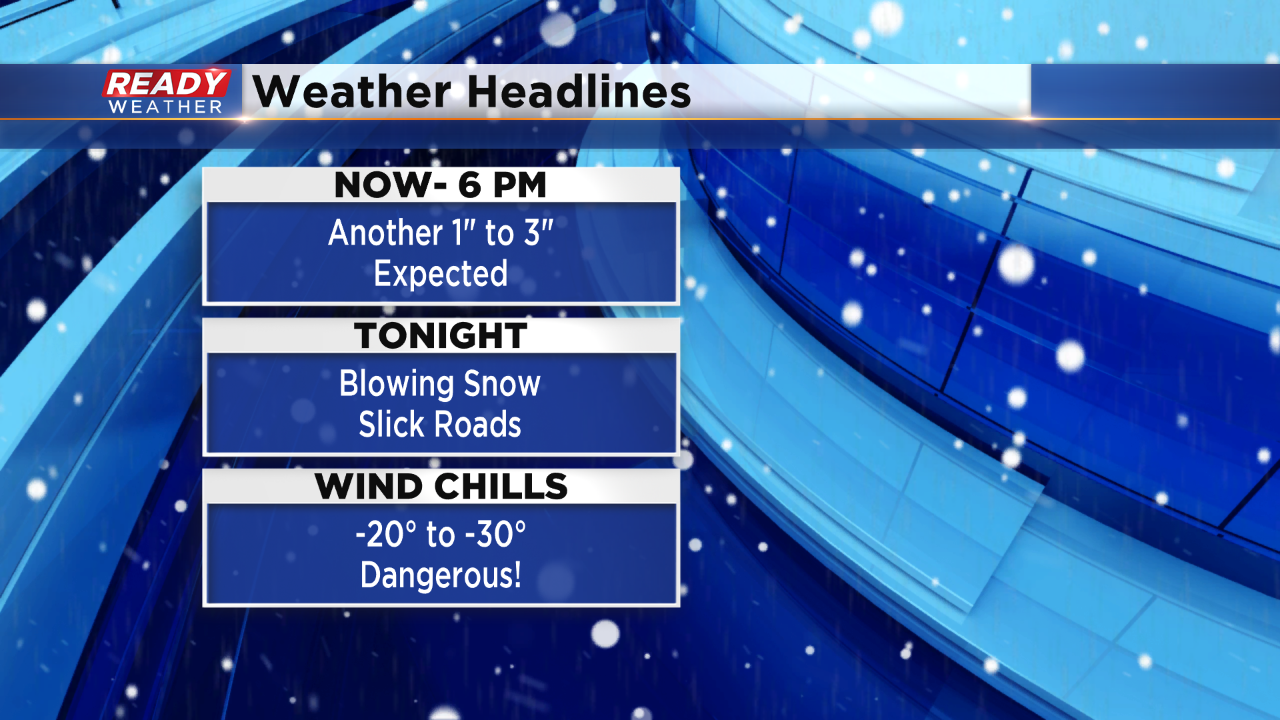 Tonight a wind chill advisory will likely be issued for wind chills between -20 to -30 below!  Roads will remain slick going into Tuesday morning.

MIDDAY UPDATE:  Look for the snow to continue this afternoon, mainly in the form of snow showers.  The wind will stay strong, causing more blowing and drifting.  Visibility will be reduced to less than a mile.  Please use extreme caution if you have to travel.  So far from this storm, some spots have seen close to a foot of snow. 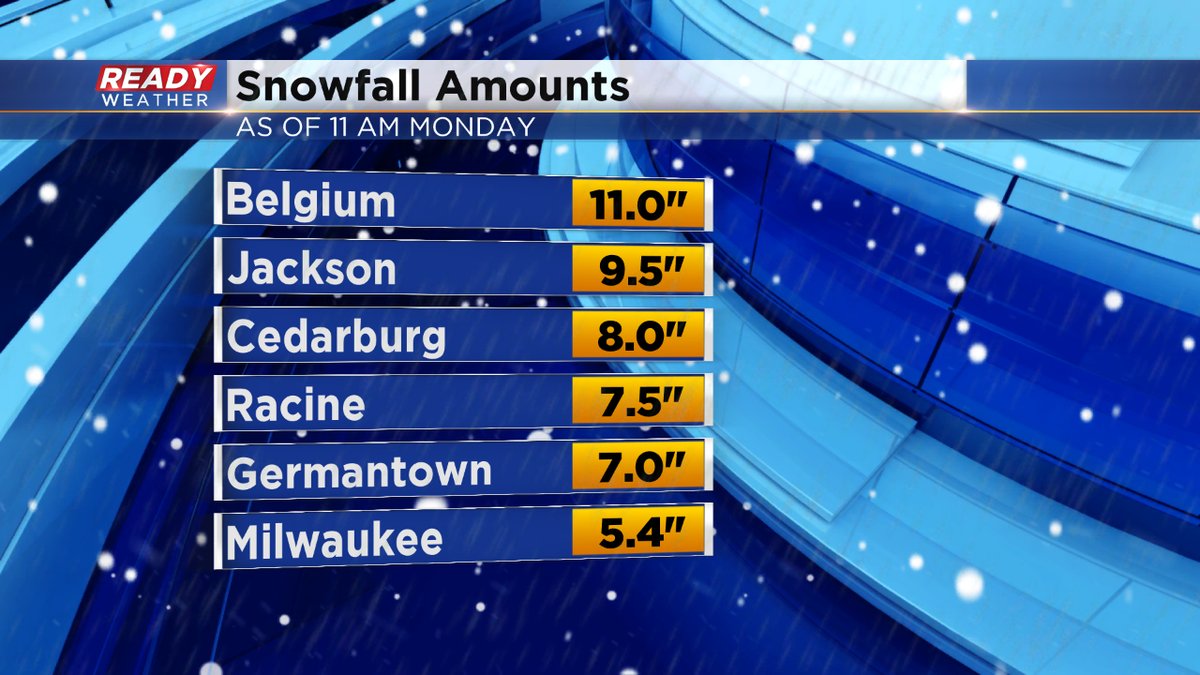 A few more inches can't be ruled out this afternoon. The Winter Storm Warning wraps up around dinner time.  Then we sit and wait for dangerously cold weather by Wednesday.

10 AM UPDATE: Snow showers will continue on and off the rest of the day.  Expect another 2"-4" of fresh snowfall from now until the end of the system later today.  The Winter Storm Warning will run until 6 pm this evening.  The roads will improve throughout the day, but there will still be snow-covered areas and nasty conditions.

7 AM UPDATE: Drier air starting to move in around the low.  This could bring down the totals around southeastern Wisconsin, however, expect still at least 6" for the region.  The scattered snow shower threat continues for the rest of the day.

A major winter storm will continue to hammer southeastern Wisconsin today, beginning to diminish slowly during the day. The heaviest of the snowfall will take place during the morning hours while the bulk of the moisture and energy clips the Great Lakes. Snowfall rates at times could be between 1”-2”. Gusty winds will reduce visibilities and create blowing and drifting. Many schools are canceled today. Snowfall totals could get over a foot in some parts. The majority of the area will see between 7”-14” of fresh snowfall when all said and done. A Winter Storm Warning will run until 6 pm today. 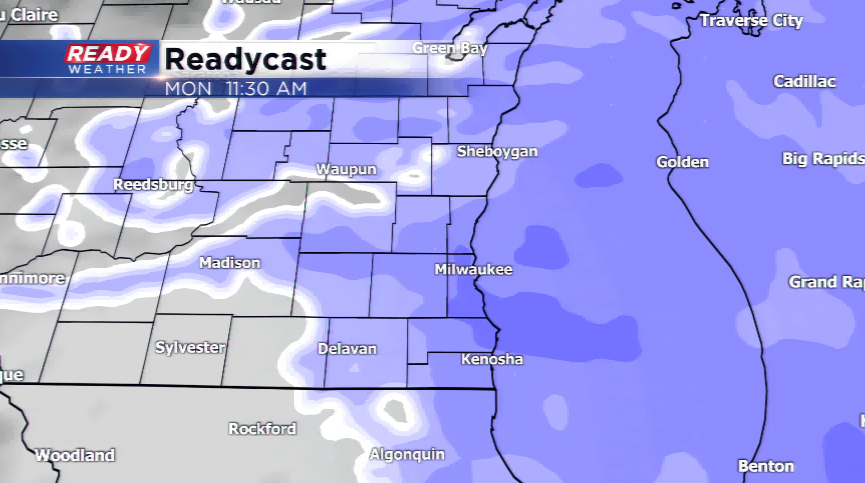 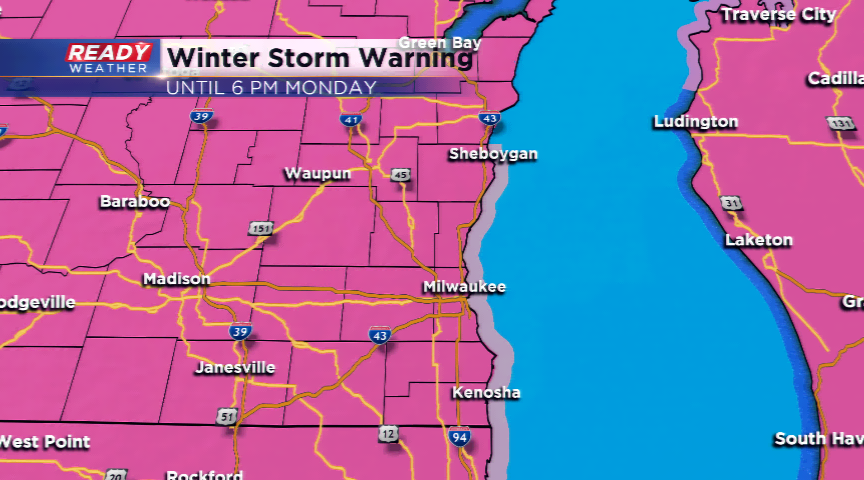 Once the snow moves out, the coldest air in nearly 23 years could hit Wisconsin. These temperatures will be brutal. In fact, the temperatures could stay below zero from Tuesday through Friday. Wind chills could fall as far as -50! 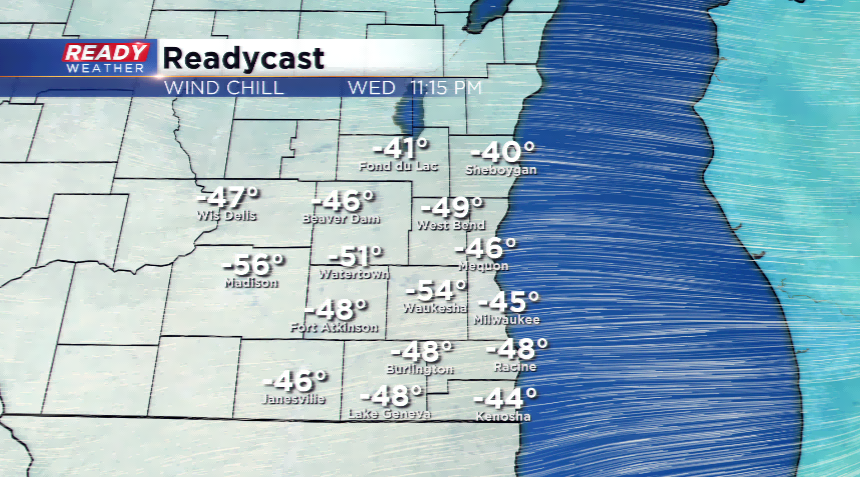