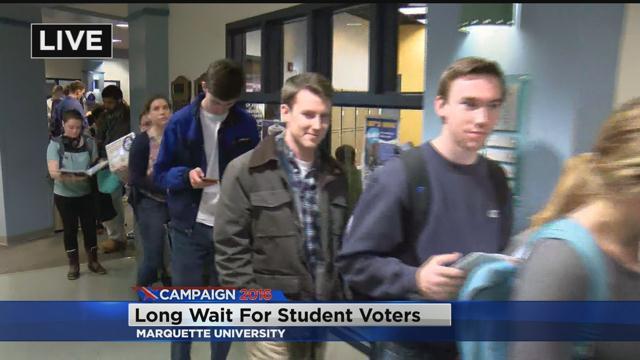 Because of the hotly contested Presidential Primary and a Milwaukee Mayor's race, the turnout for the spring election Tuesday was predicted to be robust.

By 5:30 p.m. it became apparent that the turnout would meet those predictions.

Long lines formed and some students tell CBS 58's David Ade they waited for up to two hours to register to vote.

Students who were already registered did not have to wait to cast a ballot.

Wisconsin allows same day registration. The lines were still long up to an hour after the back up of voters had become known and was broadcast live on CBS 58 News.

If you are in line by 8 p.m. you cannot be turned away.

As long as you are in place before a polling station closes, you can stay to register and cast your ballot, even if that goes beyond 8 p.m.

Patricia Doxtater told CBS 58 News she was able to get in right away and vote.

But her daughter needed to register at the polls and waited more than an hour.

"I've come here to vote every single time and I've never seen it this packed," said Doxater. "So I do think a lot of younger kids are really getting out there and voting which is good."