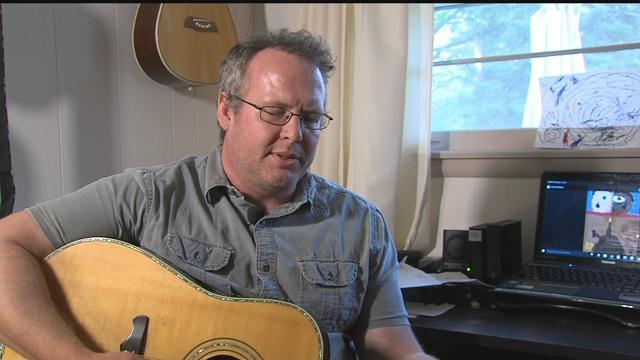 Jason Moon has been writing songs since he was 16.

His lyrics now describe what it was like to fight in the war. From 2003 to 2004, he served in Iraq as a combat engineer.

"It was generally dirty, nasty and dangerous and long and confusing," he said.

"To be quite honest, it was a mental illness and I didn't think I could have that," he said. "I was too smart. I felt I was too strong, too tough."

After a four year struggle, Moon eventually saw himself as a problem that needed to be eliminated.

"All these sleeping pills, anti-anxiety pills, muscle relaxants, I took as many as I could swallow with a little whiskey," said Moon.

The army veteran woke up three days later inside the Milwaukee VA for suicide recovery.

He was given information about PTSD and spent a year healing, using any resource he could find.

"The old you is dead," said Moon. "As soon as you can accept that and realize there's a new you, then you can start to work toward a meaningful life."

Moon picked up his guitar again, writing 14 songs on his CD, "Trying to Find My Way Home," music to express how he was feeling.

"They're carrying this pain and shame and burden and anger and turmoil inside and it's not going anywhere," he said.

He founded Warrior Songs in Milwaukee, a non-profit that uses the creative arts and music to help veterans deal with PTSD before its too late.

"We lose 22 veterans a day, plus one active duty and that's a conservative estimate," he said.

No two war experiences are the same, so Moon is giving veterans an outlet to tell their own stories. Fifteen of them are being turned into songs.

On Veterans Day, they'll be released on a CD titled, "Warrior Songs Vol. 1."

"It's going to be uplifting," said Moon, "but like most veterans you have to go through hell to get there."

Moon is living proof there is hope on the other side. With his family's support, he's learned how to cope with his PTSD.

Now, through his love of music, fellow veterans are finding the strength to face and survive their own personal war after combat.

"There's a song for every moment in life, so now there will be a song for these experiences," said Moon.

Moon said his CD's are being used by VA hospitals and veterans across the country.

He's now raising money to pay for studio time to record the remaining nine songs for "Warrior Songs Vol. 1." The music will be free to veterans, offered at a discount rate to veteran's organizations and sold to the public.

You can donate to the cause here and visit Warrior Songs to learn more about Moon's outreach and education mission.