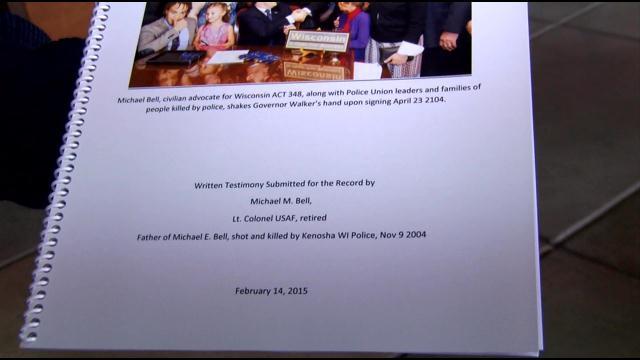 Michael Bell's son was killed by a Kenosha Police officer in 2004. In the decade that followed, Bell worked to change how investigations in officer involved shooting deaths worked. He helped put a new law on the books requiring independent reviews of those deaths in Wisconsin. He hopes to spread the message Monday at a policing task force meeting.

Bell will try to show how his method in Wisconsin could help at the federal level. He thinks adding body cameras and gun cameras would help.

\"The more data that we can collect at the time of the incident, that data can be scrutinized,\" Bell said before leaving for D.C. \"We can say 'what did we do wrong here?. What can we do better to make the system change so we don't take other lives?'. That's why the dash cam, the body cam, and the gun cam are all important parts.\"

The task force was put forth after President Obama signed an executive order in December. It established the Task Force on 21st Century Policing.

Bell will also explain how difficult it has been to make any sort of change.

\"In the beginning, I was ignored, we were vilified but we were persistent,\" Bell said. \"We kept raising our voices. It was extremely important to go ahead and have our story told and now its become a national issue and our family and Michael's death have become a national figurehead for change.\"

Bell will speak before the group Monday afternoon.