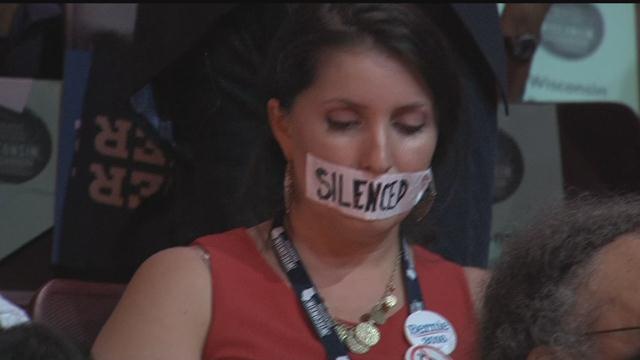 Will it be brotherly love?

Within the past hour, the Democrats are back at it in Philadelphia.

Following up on a raucous first night a lot of convention goers are commenting on this historic occasion. CBS 58's David Ade is live at the Wells Fargo Center in Philadelphia with that side of the story.

Some Sanders delegates from Wisconsin say they are ready to unite behind Hillary Clinton.

However, CBS 58 spoke to a Wisconsin delegate who picked up national attention for her demonstration yesterday.

She says a group of Sanders delegates will continue to communicate they're unhappy with the nominating process especially in light of the emails that show democratic party officials may have tried to tip the scales in favor of Clinton.

"I'm just ready to just keep telling the truth that we're not there yet… that we're not behind Hillary and if she does earn votes… she needs to earn them… it's not going to be because somebody told us to do it,”said Angie Akers.

Clinton is expected to come out of this roll call as the nominee.

The theme for today is "A lifetime of fighting for children and families."

Milwaukee Mother Maria Hamilton is scheduled to be on the stage.

Her son Dontre was killed by a Milwaukee Police Officer in a case that exposed weaknesses in training of officers in dealing with those with mental illness.

She is part of a group including the mothers of Eric Garner, Treyvon Martin, and Michael Brown from Ferguson Missouri.