Kitten found frozen to the ground during cold snap 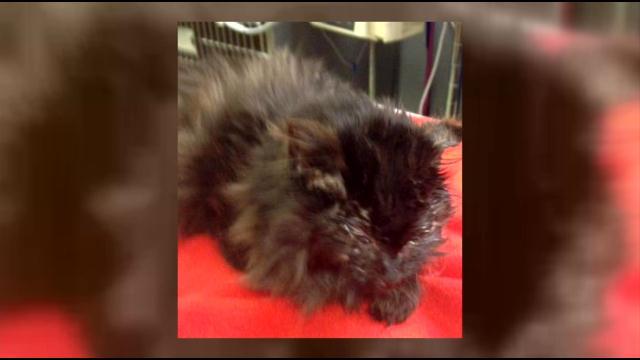 \"We call him kitty-owl-bunny, because he hops like a bunny, he's really a kitty, but he looks like an owl,\" said Vicky Cassistas, Jimmy's new owner.

Cassistas says Jimmy has made tremendous progress in the last month.

\"If you had seen the first pictures we took of him, and today,  you wouldn't believe it was the same animal,\" said Cassistas.

Casisstas' husband found Jimmy, who appears to be a stray cat, last month, curled up in a ball against a fence near his home in Oak Creek.  The dogs alerted him when they were out in the backyard.

\"When he went to pick him up, he realized he was actually frozen to the snow and ice,\" said Casisstas.

Dr. Work says if Jimmy stayed outside just a few more hours he would have died.  It took several weeks to get Jimmy healthy, and as he adapts to his new home and his new siblings, Cassistas looks forward to making him part of the family.

Dr. Work says it's important for all pet owners to keep their animals indoors during the extreme cold.  Dogs and cats should only be outside to use the bathroom.