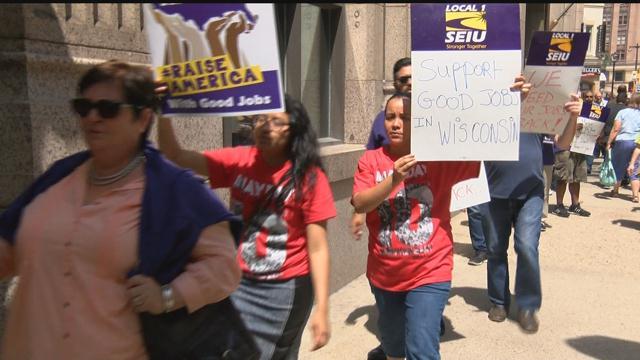 Dozens of janitors and advocates for a living wage marched on Water Street in downtown Milwaukee Wednesday afternoon.

Organizers from the Service Employees International Union say Compass Properties on Water Street brought in a contractors for janitorial services and that cost eight people their jobs.

They're calling on businesses to support unions and create living wage jobs in the Milwaukee area.

"It's important for people to be out here and speak out about this, " explained Dave Somerscales of SEIU Local 1. "Particularly when there's downtown employee appreciation week going on. But  what about the janitors that used to clean this building? They can't take part in that because they lost their jobs. So, we have to stand up and say enough it enough."

State Representative Mandela Barnes also attended the march. He says he was there to support unions and raise awareness about income inequality.