Is the Force Strong With Hillary Clinton? 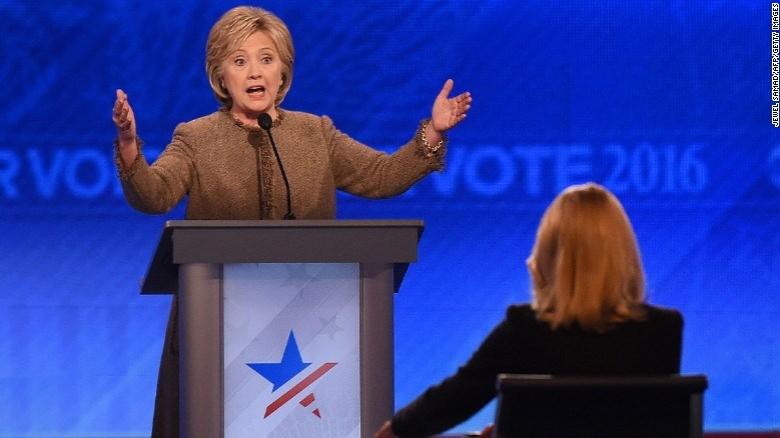 (CNN)Hillary Clinton believes, finally, that the force is with her.

The former secretary of state's tactics and performance in Saturday's Democratic debate suggested that she thinks that though her campaign struggled out of the gate following a series of personal missteps, the nomination may be finally within her grasp as voting in first-in-the-nation states looms.

Sometimes, the fights politicians chose to skip reveal as much about them as the ones they decide to wage. And Clinton sent a clear signal in New Hampshire about where her real targets lie in the 2016 presidential race.She gave her rival, Vermont Sen. Bernie Sanders, a pass on a voting data controversy that sparked bitter disputes between their campaigns over the previous 24 hours. Instead, she opted to lacerate Donald Trump and sought to tar the Republican Party brand with his antics.

Clinton has no desire to fuel an internal Democratic brushfire that could offer supporters of Sanders, already skeptical of her positions on issues from war to Wall Street, new reasons to fulminate against her campaign.

And less than seven weeks before the Iowa caucuses herald the start of voting in the Democratic nomination contest, Clinton has succeeded in blunting the Sanders surge that threatened her White House hopes during the summer -- allowing her to focus on arguments she would make in a general election campaign.

"She has nothing to gain from an ongoing dispute with Bernie Sanders; she has got bigger things in mind," said CNN senior political analyst David Axelrod.

Indeed, Clinton made clear that -- on the debate stage at least -- she wanted to focus elsewhere.

"I don't think the American people are all that interested in this," said Clinton on the data flap, returning a favor to Sanders after he used an earlier debate to grant her cover on the scandal over her use of a private email server while secretary of state then threatening to consume her campaign.

Sanders opened the debate by apologizing to Clinton after it emerged that a now fired staffer on his campaign had accessed data about her voting lists during a security glitch affecting a firewall on a third-party server hosting Democratic voting statistics.

"Not only do I apologize to Secretary Clinton ... I want to apologize to my supporters. This is not the type of campaign that we run," Sanders said.

Sign up for CNN Politics' Nightcap newsletter, serving up today's best and tomorrow's essentials in politics.

The tone of comity was a departure from the spiky ideological clashes that rumbled through the latest GOP debate on Tuesday.

In that and previous GOP debates, a vast field of candidates have struggled to fit on a single camera shot, throwing punches in multiple directions.

The three Democratic candidates, in contrast, looked dwarfed by a huge stage at St. Anselm College in Manchester, New Hampshire -- and despite differences between candidates, particularly on national security, Republicans would argue that the more intense atmosphere of their debates is a sign of a much more engaged political base than is the case for Democrats.

Either way, the absence of telling blows from Clinton's opponents allowed the former secretary of state to lash out at Republicans, furthering an impression that she is already more concerned about a general election fight than the party nominating race.

She particularly took aim at Donald Trump, whom Democrats hope to paint not as an outlier from Republican Party orthodoxy but as a representative of a party that could alienate more moderate Americans.

"I worry greatly that the rhetoric coming from the Republicans, particularly Donald Trump, is sending a message to Muslims here in the United States and literally around the world that there is a 'clash of civilizations,'" Clinton said, one of many points where she sought to draw the real estate mogul into the Democrats' debate.

She added that GOP positions, which have included a call by Trump to bar Muslim immigrants from entering the United States in the wake of terror attacks in Paris and California, were fanning "the flames of radicalization."

"We also need to make sure that the really discriminatory messages that Trump is sending around the world don't fall on receptive ears," Clinton said.

"He is becoming ISIS's best recruiter. They are going to people showing videos of Donald Trump insulting Islam and Muslims in order to recruit more radical jihadists," she continued, though her contention is disputed.She also took stances on national security at odds with her Democratic competitors.

While her rivals Sanders and former Maryland Gov. Martin O'Malley were keen to portray themselves as much closer to the dovish Democratic base on U.S. intervention abroad, she felt comfortable laying out a robust program to tackle ISIS -- including a no-fly zone in Syria -- which would include a tougher military component than that favored by President Barack Obama.

Her willingness to sketch out such aggressive policies suggested that Clinton feels that she's in a strong position in the Democratic Party even if many activists are to her left on national security.

Clinton's decision to lay out a detailed policy on ISIS amounted to an appeal to undecided and independent voters in the presidential race, amid polls showing that the public has lost confidence in Obama on these issues.

She also risked angering parts of the Democratic base on taxes, with a George H.W. Bush-like vow not to raise taxes on the middle class.

"That is a pledge that I'm making," Clinton said, staking out a position that also seemed geared more to a general election than a primary in which some progressives would prefer higher taxes to finance more government programs.

While Clinton sailed through the debate without significant political damage, the event did point to potential vulnerabilities on national security that Republicans will be sure to exploit should they face her in a general election.

"We now finally are where we need to be. We have a strategy and a commitment to go after ISIS," Clinton said, in a statement that appeared to put her at odds with public opinion.

"No @Hillary Clinton - We are not "where we need to be" in fight against ISIS," Bush said on Twitter.

Clinton also again struggled to explain her role in advocating military action in Libya in 2011 that resulted in the overthrow of longtime dictator Moammar Gadhafi but left behind a failed state, parts of which have become a haven for ISIS.

That issue is sure to be a key exhibit in the Republican case that her record as secretary of state and what GOP candidates see as a disastrous period of U.S. confusion and retreat abroad should disqualify her from being president.

And although her answer to a question on how her husband Bill Clinton would fit into the role of presidential spouse should she win the White House was lighthearted, her response that "I am probably still going to pick the flowers and the china for state dinners and stuff like that" could perhaps be seized on by GOP opponents as a sign that she is already metaphorically measuring the drapes in the White House.

But for now, Clinton appears to be well positioned to ease through the Democratic primary and take the fight to her preferred targets in the Republican Party.

"You know, everybody says every election's important, and there's truth to that. This is a watershed election. I know how important it is that we have a Democrat succeed President Obama in the White House," Clinton said in her closing statement, before making a quip which suggested that the restoration of tried-and-tested franchises from another era -- be it in movies like Star Wars or in politics -- could work.

"Thank you, good night and may the force be with you."