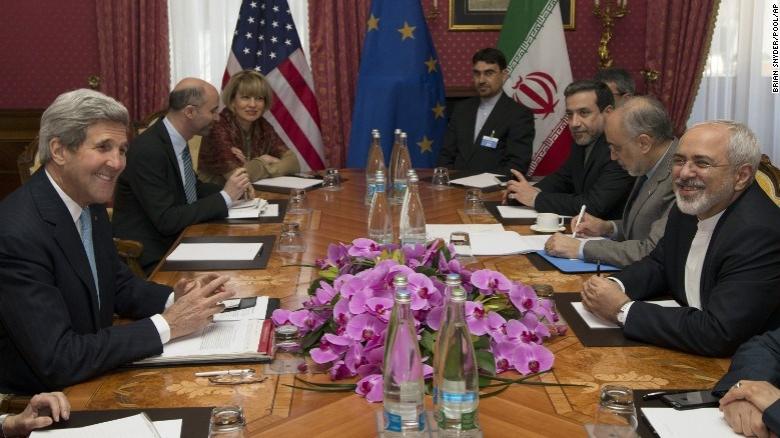 International talks over Iran's nuclear program appeared to be inching forward Thursday after stretching well beyond their original deadline.

\"We have examined all the solutions, which should provide the axis of a final accord between now and the end of June,\" Zarif told reporters Thursday morning.

World powers -- the United States, Russia, China, France, the United Kingdom and Germany -- are now examining the results of the overnight talks without Iran present, he said.

The talks, aimed at reaching a preliminary political deal on Iran's nuclear program, blew past their initial, self-imposed deadline of late Tuesday as Iranian and U.S. negotiators struggled to find compromises on key issues.

But the negotiators have doggedly continued their work in Lausanne, Switzerland, trying overcome decades of mistrust between Tehran and Washington.

'A few meters from the finishing line'

\"We are a few meters from the finishing line, but it's always the last meters that are the most difficult. We will try and cross them,\" French Foreign Minister Laurent Fabius said as he returned to the talks late Wednesday. \"We want a robust and verifiable agreement, and there are still points where there needs to be progress, especially on the Iranian side.\"

Iran wants swift relief from punishing sanctions that have throttled its economy. And Western countries want to make sure any deal holds Iran back from being able to rapidly develop a nuclear weapon.

It's unclear what kind of accord might emerge from this round of talks -- Iran appears to be resisting too many specifics, while the U.S. side wants to put hard numbers on key points.

Whatever it might turn out to be, the interim deal will need to be fleshed out into a full deal before the final deadline of June 30. Some of the thorniest issues could end up being left for that final phase.

But in the meantime, the Obama administration needs something solid enough it can sell to a skeptical Congress, which has threatened to impose new sanctions on Iran. The potential deal is also coming under sustained attack from Israeli Prime Minister Benjamin Netanyahu.