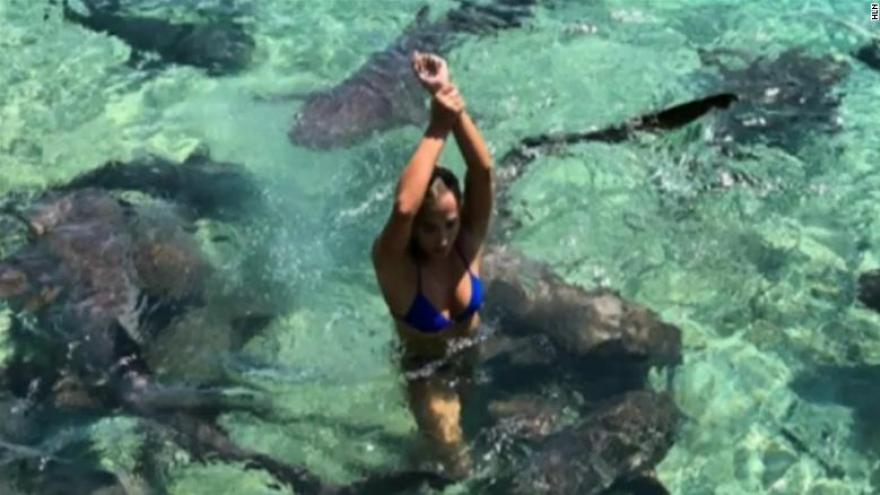 (CNN) -- It seemed like the perfect holiday photo opportunity: Crystal blue waters and a pack of docile nursing sharks lazing on the docks of Staniel Cay in the Bahamas.

But when Instagram model Katarine Zarutskie waded in to join the sharks, one clamped it jaws onto her arm and pulled her underwater.

"All of a sudden it felt like 15 people were squeezing on my wrist really, really, really hard," Zarutskie said. "Next thing I knew I was underwater and I felt this, and the adrenaline just kicked in."

The 19-year-old Californian model is no stranger to the beach, but says she was inspired to swim with the sharks by similar photos she'd seen before.

"It seemed safe and I'd seen all these photos so I totally thought it was okay," she said.

When her boyfriend's father began to take photos of Zarutskie floating amongst the sharks, he unwittingly captured the shark submerging her.

The photos show Zarutskie covering her wound as she rushed to dry land.

The owner of the marina said that nurse sharks were typically docile but the sharks could have been feeding and might have mistaken Zarutskie's fingers for food.

Zarutskie emerged from the incident shaken but relatively unscathed.

Despite her ordeal, she does not warn others from repeating the experience but urges caution.

"If you do swim with them -- if you have the opportunity -- you do have to take in consideration the risks."