In emotional service, Jesuits and Georgetown repent for slave trading 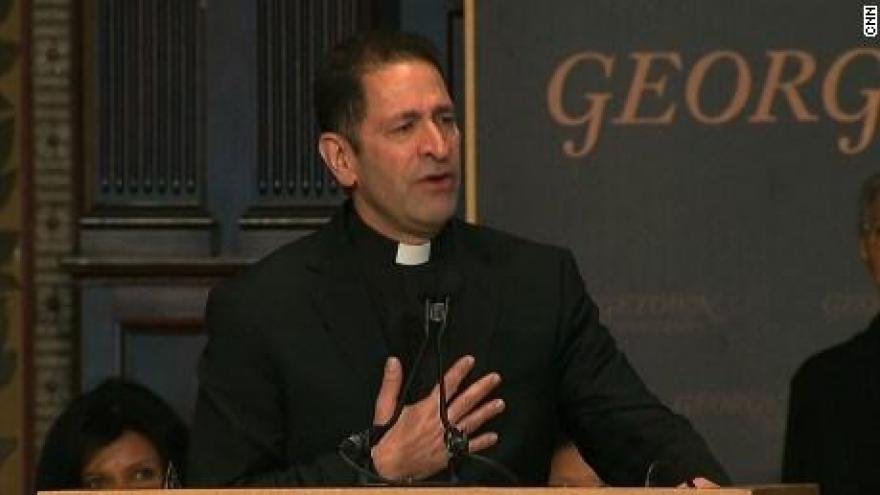 (CNN)There is wide gulf, Frederick Douglass wrote in 1845, between Christianity proper and the \"slaveholding religion of this land.\" One is \"good, pure and holy,\" the other corrupt and wicked, the \"climax of all misnomers, the boldest of all frauds.\"

\"We have men-stealers for ministers, women-whippers for missionaries and cradle-plunderers for church members,\" Douglass wrote in \"Life of an American Slave.\"

For Douglass, as for other African-Americans, the sin of slavery was intolerable; the complicity of Christians unforgivable.

On both counts, the Jesuit order, one of the Catholic Church's most powerful group of priests, (Pope Francis is a member) was guilty. In the United States and elsewhere, the Society of Jesus, the order's formal name, owned and sold slaves.

One of those sales, in 1838, of 272 slaves, was made on behalf of Georgetown University in Washington. It saved the fledgling school, but ruined hundreds of lives, tearing families asunder, while condemning men, women and children to lives of cruel bondage.

On Tuesday, the Jesuits and Georgetown repented. In a \"Liturgy of Remembrance, Contrition and Hope,\" hosted at Georgetown, the university's president and Jesuit leaders issued emotional mea culpas 179 years in the making.

\"We express our solemn contrition for our participation in slavery, and the benefit our institution received,\" said Georgetown's president, John DeGioia. \"We cannot hide from this truth, bury this truth, ignore this truth. Slavery remains the original evil in our republic, an evil that our university was complicit in.\"

More than 100 descendants of slaves sold by the Maryland Jesuits attended the service, many wearing green ribbons to symbolize hope and new life. They processed in Healy Hall to the strains of \"Amazing Grace,\" sung by a gospel choir. Some wiped away tears during the readings and prayers, and stood to applaud when Mary D. Williams-Wagner, a descendant of slaves, read Douglass's remarks about Christian slaveholders.

\"Their pain was unparalleled,\" Sanda Green Thomas, who also participated in the service, said of her ancestors. \"Their pain is still here. It burns in the soul of every person of African descent in the United States.\"

Georgetown is not the only American college with ties to the slave trade. All of the Ivy League schools, with the exception of Cornell University, were also complicit in some way, historians say. Many those schools were also founded by religious groups.

But some American Jesuits in the United States say their slaveholding past is particularly painful, especially as they see racism's lingering stains on modern society.

\"This isn't just a Maryland issue,\" the Rev. Timothy Kesicki, president of the Jesuit Conference of Canada and the United States, the society's top official in North America, said in an interview after Tuesday's service. \"In a sense, all Jesuits in the United States are descendants of those Jesuits who made the decisions to hold slaves and in this case sell slaves. We don't look at it as their sin; we look at it as our sin.\"

In his homily, Kesicki offered a contrite counterpoint to Douglass' denunciation of Christian slaveholders.

\"When we remember that with those 272 souls we received the same sacraments; read the same Scriptures; said the same prayers; sang the same hymns; and praised the same God,\" he said. \"How did we, the Society of Jesus, fail to see us all as one body in Christ? We betrayed the very name of Jesus for whom our society is named.\"

Later on Tuesday, Georgetown held a ceremony renaming campus buildings that once bore the names of Jesuits who supervised the sale of slaves. It will also host a private dialogue with descendants, Jesuits, and Georgetown representatives, and hold a \"libation ritual\" commemorating the 272 women, men and children sold in to slavery with soil from a former plantation in Louisiana.

In some ways, the ceremonies were the culmination of an effort begun in 2015, when DeGioia created a working group to study Georgetown's history of slavery. That process has included consultation with descendants, the creation of a Department of African-American Studies, new faculty, and the establishment of a research center focused on racial justice. Georgetown also offers a course examining the university's roots in the Jesuits' slave economy.

But several descendants said Tuesday's ceremonies marked a new beginning, not an end.

\"Those were some very serious statements of remembrance and contrition,\" said Onita Estes-Hicks, whose great-grandparents, Nace and Biby Butler, were slaves sold by Georgetown. \"I could see a lot of the descendants were in tears. This is all new territory. It's moving something around in American history, in family history and in ourselves. \"

Like many of the descendants, Estes-Hicks and her ancestors maintained their Catholic faith, even after the Jesuits sold them. Several relatives are named Nace, a variation of Ignatius, as in Ignatius of Loyola, the founder of the Society of Jesus. Her father was a \"rosary person,\" having been taught the ritual by his grandfather, who learned it from the Jesuits as as slave.

\"We're tied to them by name, by rosaries and by religion,\" she said of the Jesuits.

She said it was especially shocking -- and angering -- to learn that Jesuit priests had sold her ancestors. \"We went through a stage of denial that lasted for God knows how long.\"

As Estes-Hicks was leaving Healy Hall, she bumped into her Jesuit pastor, the Rev. Gregory Chisholm of the Church of St. Charles Borromeo in Harlem, New York.

\"He's been helping me through this,\" Estes-Hicks said. \"I went to see him two years ago,\" when Estes-Hicks and many other descendants learned about Georgetown's history, \"and I said I'm really upset with these Jesuits.\"

\"What did you think, that I was going to start a fight?\" Estes-Hickes asked with a smile.

\"Well, I think you were on solid ground,\" said the Jesuit priest.