"I Broke Down in Tears"; Mukwonago 7th Grader with Rare Disorder Scores Touchdown 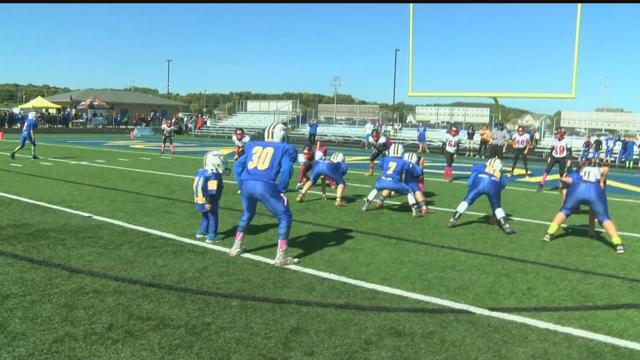 As the sun began to set on the Mukwonago High School football field, the clock ticked down to the end of a game between two 7th grade teams.

The final score didn't matter. The talk of the stadium, was Eddie Kimminau.

A rare genetic disorder called Morquio Syndrome has stunted his growth, causing tissue, bone, and organ damage, and leaving him bound to a scooter for most of the day. A proud member of the football team, Eddie spends practices watching from the sideline, exchanging high fives with team-mates and friends.

He was told he would never be able to step on the field, as a simple tackle could seriously injure him.

But Saturday afternoon, with a little help from the other team, Kimminau got his wish.

Following the opening kick-off, Kimminau's coach put him into the game at running back. The defense parted and let him score, as players from both teams chanted his name and surrounded him in celebration.

"I immediately broke down in tears, and I just want to thank all my teammates for helping me and blocking for me, and making sure I didn't get killed," Kimminau said after the game with a laugh.

Watch the video above to see the heartwarming moment.