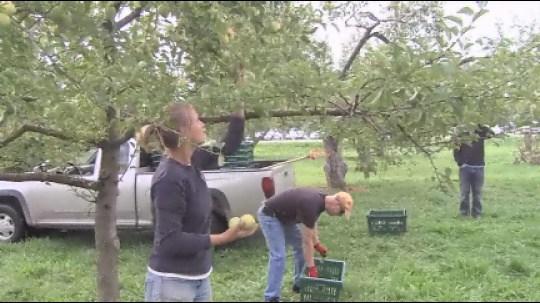 Each year Hunger Task Force provides food for thousands in our area who are in need of a meal. Thanks to a unique facility, the organization goes beyond just collecting food and donations to answer the call of those in need.

\"We're getting ready to pick the apples right now,\" Hunger Task Force executive director Sherrie Tussler said as she pointed to an orchard in Franklin.

From the outset, a look around the orchard and farm, located south of Milwaukee, looks like just about any other. However it is not the produce grown that makes it different. It is where the produce goes, as well as who helps cultivate and harvest it that makes the Hunger Task Force farm so very different. And Tussler is immensely proud of that.

\"You don't see food banks growing their own food\" said Tussler. \"You see food banks asking for donations. Across the country there are about half a dozen food banks that are doing some farming. Our farm is the largest of all of them.\"

Farm supervisor Matt King helps oversee the day to day operations in Franklin. He showed our CBS 58 crew around as he spoke about the commitment of volunteers, who make so much of what you see on the farm possible.

\"We would not be able to do what we do out here at the farm without volunteers,\" King said.

The love affair with the farm has produced a bountiful offering to the many families in the Milwaukee area who are food insecure. That is in no small part, thanks to the growing surge of those looking to give their time and effort to make an impact.

\"Last year, we distributed ten-million pounds of food,\" Tussler proudly shared. \"A million of those pounds came from the farm.\"

\"Last year we had 3900 volunteers. So the community engagement with this project has just been exponential.\"

King added, \"It's a really neat opportunity for Urban residents to come out ot a farm. It's only 20 minutes away [from downtown Milwaukee].\"

Hunger Task Force is looking to grow more than just food, with the restoration of a facility on the farm that has a new intended purpose. Tussler explained that new purpose to us during our visit.

\"We needed a visitor center, and we need an education center,\" Tussler explained. \"Right now volunteers come out, and we're literally standing out on the grass and yelling at them about what they're about to do. So we want people to feel welcome when they get to Hunger Task force.

\"We're going to convert this old granary, built in 1946, into a visitor center. And it's going to look really cool.\")

Hunger Task Force is currently on a fundraising effort to collect 750-thousand dollars for the visitor center, and they're confident they'll meet their goal.

\"Farm work is clearly a lot of hard work, but we're getting it done,\" Tussler said. \"And we're delivering that million pounds of produce right here in Milwaukee.\"