Hubble image: Dormant black hole, in a word, is gargantuan 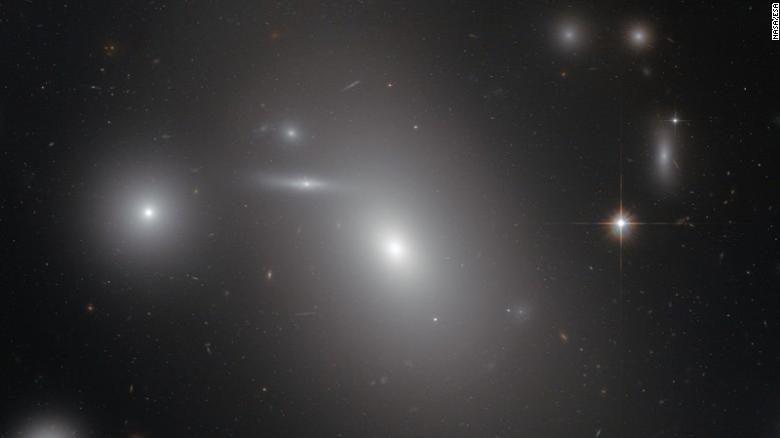 (CNN)The Hubble Space Telescope has given scientists their sharpest-ever look at a known galaxy containing an enormous black hole.

The supermassive black hole is in a galaxy called NGC 4889, one of several in the Coma Cluster, officials said Thursday.

According to NASA, every galaxy has a supermassive black hole with "masses greater than than 1 million suns combined" at the center. It is believed that the black holes were created at the same time as the galaxy they are in.

Even though NGC 4889's black hole measures 130 billion kilometers in diameter, you can't see it in the picture. Black holes are invisible because light can't escape their gravitational pull, according to NASA and the European Space Agency (ESA). But scientists were able to measure NGC 4889's black hole by using the velocity of the stars moving around it and found it to be one of the largest known black holes.

While this black hole used to "feast" on stars and gas, it has been dormant for billions of years and is "now so peaceful that stars are forming from its remaining gas and orbiting undisturbed around the black hole," according to a statement issued by NASA and ESA.

"Certainly, a collision with another galaxy can reactivate the black hole," said Roeland van der Marel, a WFIRST mission head at the Space Telescope Science Institute in Baltimore, where researchers work on the Hubble Space Telescope, among other missions.

WFIRST stands for Wide-Field Infrared Survey Telescope, which is NASA's new astrophysics mission with the Space Telescope Science Institute to study large regions of the sky in order to learn aboutplanets beyond our solar system.

Are we in danger of colliding with this black hole? The answer is no -- at least not anytime soon.

"Black holes don't suck," van der Marel said. "That's a common misconception. Material that happens to be moving in the direction of the black hole falls in because gas has friction that gets eaten [by the black hole]. Once the black hole has eaten all the gas there it can just move on and it will be dormant until it gets another dose of material that it can consume."

Black holes "follow the laws of gravity," according to NASA research, meaning that unless the black hole's orbit is very close to our solar system, it would not likely impact Earth.

As long as the Milky Way stays out of NGC 4889's way, we have no fear of falling into the supermassive black hole. That shouldn't be hard to do since NGC 4889 is 300 million light years away -- that's 150 times the distance that the Andromeda Galaxy (our closest galaxy) is from Earth.

For even more context, the sun is eight light minutes from Earth.

Even though the Earth is not at risk of falling into the center, the photo is important to scientists for what is not shown. Since this image is the clearest look yet of NCG 4889, scientists are able to use scientific instruments that measure high-energy light given off by stars orbiting near a black hole.

"The black hole only influences the material very close to it, so to find evidence of black holes you need very sharp images to take measurements," van der Marel says.