How to See the Orionids, the Biggest Meteor Shower of the Season 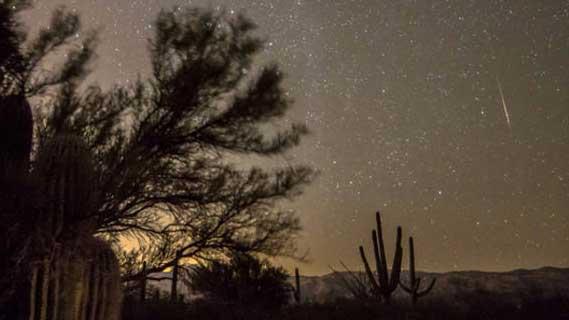 (CBS NEWS) Along with the Geminids in December and the Perseids in August, the most reliable annual display of “shooting stars” is the Orionid meteor shower in October. Unfortunately, this year, the Orionids will face a formidable handicap.

When the Orionid meteor shower reaches its peak Friday morning (Oct. 21), the waning gibbous moon (more than half of its surface illuminated) will be in the sky almost all night long. Hence, its glare will severely hamper observations in 2016.

The annual Orionid meteor shower usually lasts from about Oct. 16 to Oct. 26. A few swift Orionids may appear as early as the start of October, and there may be a lingering straggler or two as late as Nov. 7. The numbers seen by an observer tend to reach a maximum of 20 per hour when the conditions are clear and dark and the shower radiant point (near the border of the constellations Orion and Gemini) is pretty high in the sky. [Orionid Meteor Shower 2016: When, Where & How to See It]

The meteors are known as “Orionids” because they seem to fan out from a region to the north of the constellation Orion’s second-brightest star, the ruddy-hued Betelgeuse.

Currently, Orion appears ahead of us in Earth’s journey around the sun and does not completely rise above the eastern horizon until after 11:30 p.m. local daylight time. The Orionid meteors are at their best during the predawn hours, at around 5 a.m., when Orion will be highest in the sky toward the south. Because Orion’s famous three-star belt straddles the celestial equator, the Orionid meteor shower is one of just a handful of known meteor showers that can be observed equally well from the Northern and Southern hemispheres.

Usually, Orionid meteors are dim and not easy to see from urban locations, so it’s best to find a safe rural location in order to get a good glimpse of Orionid activity. After peaking on Friday morning, activity will begin to wane slowly, dropping back to about five meteors per hour around Oct. 25.

Even though the moon turned full this past week and is now on the wane, it will still have an adverse impact on this year’s Orionids. On Friday morning, during the Orionid maximum, the moon will be in the nearby constellation of Gemini, 62 percent illuminated and flooding the sky with its bright light. So although the Orionids will be at their peak, many of these streaks of light will likely be obliterated by the bright moonlight.

Still, an exceptionally bright Orionid meteor might be visible in the moonlight. The best plan this year probably would be to observe on the later nights of the display, after Oct. 22, when the radiant (the section of the sky where the meteors seem to originate) will rise before the moon. In mid-northern latitudes on Oct. 24, for example, the radiant will be more than one-third of the way up from horizon to zenith (the point directly overhead) when the moon rises at around 1:25 a.m. local daylight time. Recent studies have shown that about half of all Orionids that are seen leave trails that lasted longer than other meteors of equivalent brightness.

The Orionids are often referred to as the “legacy of Halley’s Comet.” In fact, these tiny rocks and flecks of dust are merely the cosmic litter that the comet has left behind in space along its orbit around the sun. These meteoroids in space are the remnants of a comet’s nucleus (its rocky, icy core). All comets eventually disintegrate into meteor swarms, and Halley’s is well into that process.

These tiny particles — mostly ranging in size from dust to sand grains — remain along the original comet’s orbit, creating a “river of rubble” in space. In the case of Halley’s comet — which has likely circled the sun many hundreds, if not thousands, of times — its dirty trail of debris has been distributed more or less uniformly all along its entire orbit. When the Earth passes through that river of rubble, those tiny bits of comet pass through the planet’s atmosphere. Friction with the atmosphere raises the temperature of the meteoroids to a white heat (eventually burning up completely) and produces the effect popularly referred to as “shooting stars.”

The orbit of Halley’s Comet closely approaches the Earth’s orbit at two places. One of those points occurs in early May, producing a meteor display known as the Eta Aquarids. The other point comes in mid- to late October, producing the Orionids. Step outside before sunrise any morning this week through early next week, and if you spot a meteor, there’s about a 75 percent chance that it originated from the nucleus of Halley’s Comet.

Halley’s Comet is due to return to the inner solar system in the summer of 2061. In fact, the comet should be a very striking sight in the western evening sky during the first week of August that year.

During the comet’s most recent return, in February 1986, it was oriented from our Earthly vantage point on the other side of the sun at its brightest, and about three times farther away than it will be in 2061. Many who gaped at the sky three decades ago to get a glimpse of this historic celestial object came away unimpressed. At its next return 45 years from now, however, it could very well be a spectacular sight.

But considering some of us may not be around nearly five decades from now, the Orionids might be a good consolation prize.

Joe Rao serves as an instructor and guest lecturer at New York’s Hayden Planetarium. He writes about astronomy for Natural History magazine, the Farmer’s Almanac and other publications, and he is also an on-camera meteorologist for News 12 Westchester, New York.