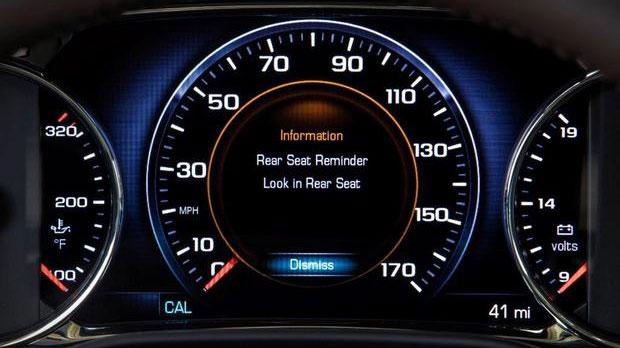 (CBS NEWS) More than 700 children have died since 1991 from heat stroke after being left behind in vehicles, with the majority of cases involving parents who unknowingly left them inside their cars.

With the goal of preventing more deaths, General Motors (GM) is introducing what it says is the first feature that reminds drivers to check the rear seat before leaving their vehicle. The Rear Seat Reminder will be introduced in the 2017 GMC Acadia, and the automaker said it expects to include the feature in more GM models.

Children are more likely to succumb to heatstroke because their bodies overheat up to five times faster than an adult's, according to the advocacy group KidsAndCars.org. In most cases, children are left in cars unintentionally, often when parents are tired and on auto-pilot, such as concentrating on getting to work.

"It is one of my worst fears, as I am sure it is for so many parents, that harm would come to my children," said Tricia Morrow, GM global safety strategy engineer. "I have read so many heart-wrenching stories of well-meaning parents overcome with grief following the tragic deaths of their children, having died from heatstroke after they had been unintentionally left in a vehicle."

GM's engineers developed an alert that detects when a rear door is opened and closed, which could indicate that something -- or someone -- is in the rear seat. Morrow notes that in some cases there might be nothing in the back seat, or it could be items such as groceries or a gym bag. She described the alert as a "simple reminder" that can be introduced quickly into GM's cars while its engineers work on a more advanced system.

"Since the design of an accurate and reliable technology to detect children left in vehicles is challenging from a technology and warning standpoint, we wanted to do something quickly that might help prevent children from being accidentally left behind in their vehicle," she noted.

New parents may be especially prone to forgetting their kids in cars, given that they are more likely to be tired and stressed. Babies sit in backward-facing carseats, which means parents in the front seat can't always see them. If a baby falls asleep, a parent may forget that the child is sitting in the backseat, according to KidsAndCars.org.

The automaker believes the feature will be a selling point for parents.

Morrow added, "This simple solution won't detect a child in the vehicle, but even if it only saves one child's life, it will be totally worth it."