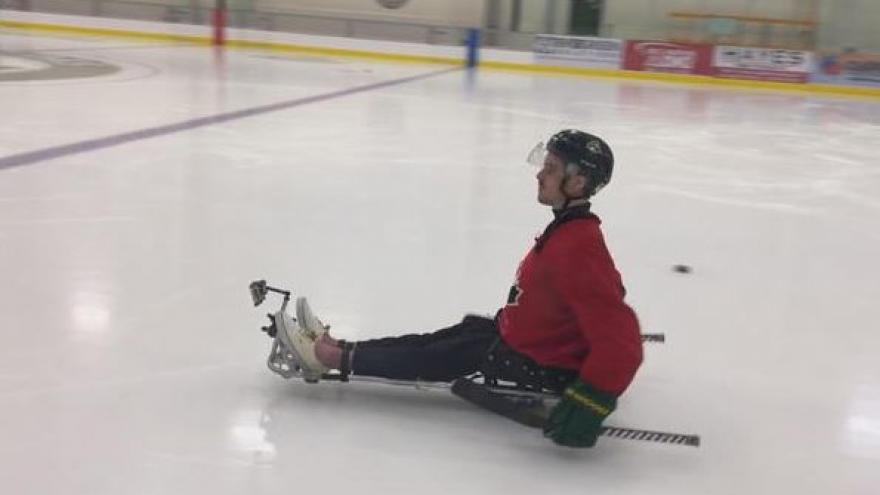 (CBSNews) -- A Canadian junior hockey player who survived a bus crash that killed 16 people, including many of his teammates, is making a triumphant return to the ice. Ryan Straschnitzki was paralyzed from the chest down when his team's bus crashed in April. Now, less than four months later, the 19-year-old is ready to compete again.

At a hockey rink outside Calgary, Ryan skated effortlessly onto the ice. It was his first day learning to play sledge hockey – a sport designed for people with physical disabilities. For Ryan, that day has been a dream of his since learning he was paralyzed from the chest down.

"I just wanted to be on the ice. I knew my legs aren't gonna work for however long but if I don't heal... But just being on the ice would be amazing," Ryan told CBS News' Don Dahler.

Ryan was a defenseman playing his first season with the Humboldt Broncos in Saskatchewan, Canada. The team was traveling to a hockey game in a neighboring town.

"All I remember was the bus driver screaming and something pulling in front of us and I kind of blacked out from there and then woke up against the semi-truck looking at the mayhem. And, you know, my first instinct was to get up and to help my teammates and my brothers and I couldn't move," Straschnitzki said. "The only thing I could do was scream for help, but it was tough because I had broken ribs and a punctured lung, but, I mean, I did what I could to help."

A tractor-trailer collided with the team bus on an isolated stretch of highway. Sixteen of the 29 people onboard were killed in the crash. A few days after the accident, Ryan's dad told "CBS This Morning" about the moment his son found out that he might never walk again.

"When they told us, Ryan just looked at us and goes, 'Dad, Olympic sledge hockey. I'm getting us the gold'… I couldn't fall apart there, I had to be strong for him, but just, that kid's amazing," Tom Straschnitzki said.

But the road back to the hockey rink has been difficult. Ryan suffered four broken ribs, serious head trauma, a lacerated spleen, and two shattered vertebrae. After a six-hour surgery in a Canadian hospital, Ryan was flown to the Shriners Hospital in Philadelphia, which specializes in spinal cord injuries. From a stretcher still unable to move, Ryan told reporters he was going to set new goals and challenges every day in honor of the teammates he lost.

Ryan's rehabilitation began that same day. The doctors' first priority was to help him adjust to life in a wheelchair. Then Ryan's athletic skills were put to an even greater test with an intensive program of physical rehabilitation, which included time in the water on the treadmill and even doing upper body workouts.

"Yeah. There's lots of, like, muscle strengthening 'cause my left side was weaker than my right and I did a lot of weights and training. And now, it's starting to get stronger so I can last longer in my wheelchair," Ryan said.

Less than a month after not being able to move, Ryan was strong enough to join his teammates in Las Vegas for a reunion. Now, Ryan is back playing the sport that he loves, doing what comes naturally: moving forward in body and spirit.

"I just wanna say thank you. And, you know, stay strong. You know, life will get you down, but as long as you, you know, keep that positive mentality, anything's possible," Ryan said.

In July, the driver of the tractor-trailer that allegedly caused the crash was charged with 16 counts of dangerous driving causing death. A court date is scheduled for later this month.