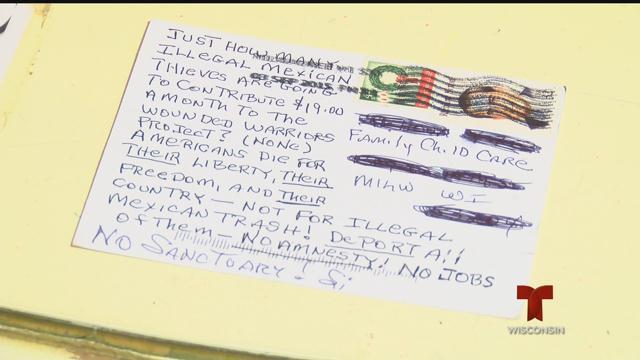 Several business owners in the South Side of Milwaukee are concerned about messages they are receiving in their mail boxes. The messages are filled with racial slurs.

Lilliany Holguin opened a day care in the south side of Milwaukee in 2013. She says it was a dream come true. But a few weeks ago, she received a postcard in the mail that diminishes what she worked so hard to achieve.

"I saw this and I was like what? I was very shocked. I work hard for what I do... for what I do for my community," Holguin said.

The postcard says in part, "Americans die for their liberty, their freedom and their country. Not for Illegal Mexican Trash. Deport all of them."

"It's very disturbing... very disturbing because I was born in the Dominican Republic and raised here since age of 2. I am an American citizen. They're just targeting Hispanics in general," Holguin said.

Hispanics like Walter Garron, who also received the postcard at the UFCW Union Local 1473 in Milwaukee.

"We are a pro-Latino union. We've been working really hard to do that and I believe that's why we were targeted," Garron said.

Milwaukee Police tell CBS 58 and Telemundo Wisconsin that they are aware of the postcards. However, since there is no direct threat, there is nothing much they can do.

"This is a threat. I consider it as a threat. What could happen next? are they waiting for something to happen? asked Holguin.

Garron says he knows of at least 8 other business owners who received the postcards. They all plan on meeting at 7 p.m. on Thursday night to discuss the issue and see what they can do.

"We want to generate pressure especially with the police. we want to find answers and see what they are doing to keep us safe as citizens," Garron said.