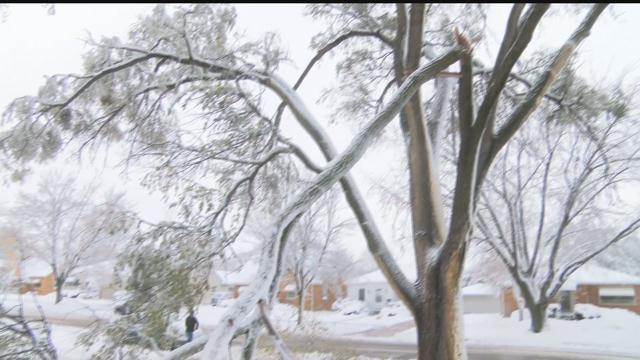 During peak outages Saturday there were about 3,000 people without power in Kenosha county.

Saturday was also the first test for Bob Petersen's snow clearing equipment. He was clearing his neighbors driveways mid-afternoon.

He admitted that he was one of the guys who thought Kenosha's forecast might be a little overblown.

"I kind of stayed up late last night. I went to bed about one. And it was just coming down lightly then and it wasn't sticking on the roads at all," Petersen said.

Don Stich, who lives a few blocks away, said he thought the same thing.

"I got up about 6-6:30 and I'm kind of anxious to look outside and I see just rain and a little snow on the ground," Stich said.

"I was kind of bummed out because I do like a good blizzard once in a while," Stich said.

The worst of the snow actually came during the day, Stich said. First his power went out.

"The house is starting to get cold and, you know, you get a little worried about everything," Stich said.

Then he looked over at his father-in-law's house.

"I was looking out at the snow and I glanced over here and I seen it was down. I was just happy that it didn't hit the house or hurt anyone," Stich said.

"11 o'clock this morning my wife and I heard this terrific crack. And then it sounded like snow rolling off the roof and it was really the tree hitting the roof," Pfeiffer said.

There was no significant damage to his house and he feels he got off lucky for now.

The wet snow is still packed nine inches thick along everything he owns and anything melting might freeze overnight.

"I've lived on the corner all 70 years and this is by far the heaviest snow I ever can remember."

The Kenosha Fire Department was also getting a steady stream of calls for accidents out on the road Saturday. Freezing temperatures overnight could worsen driving condition.

They're urging caution if you're heading out in the morning.