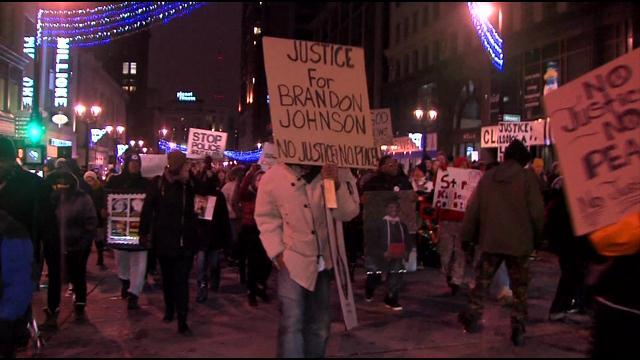 About a dozen demonstrators gathered outside the Milwaukee County Courthouse in solidarity with protesters in Ferguson, MO.

\"There's a time for peace, but there's also a time for war,\" said Duril White, a demonstrator, as he addressed the group, \"and the oppressor would never give you your freedom, if you don't fight for it.\"

The Rally for Justice was a stark contrast from the protest through Downtown Milwaukee Tuesday.

Instead of chanting and marching-- it was a meeting of the minds.

\"I am afraid of the Milwaukee Police Department, I want that to be known today,\" said Michael Wilkins.

Wilkins has lived in Milwaukee his whole life.

\"I'm sick of being judged because I'm wearing my hat or my hood, it's cold,\" said Wilkins.

Wilkins talked about the discrimination he faces each day on the job.

\"I'm a security guard,\" said Wilkins, \"I call the police when I have problems, you know what they do to me? They run my name.\"

Just one of many demonstrators who want city leaders to know-- black lives matter.

Regardless of race and color-- they're ready to take matters into their own hands.

\"This country has had it's way with Black people for the last 500-years and they tell you, get on your knees and pray-- it's time for you to get on your feet and stand like a man,\" said Wilkins.

The Coalition for Justice is also planning another demonstration at next Thursday's meeting with Fire and Police Commission.