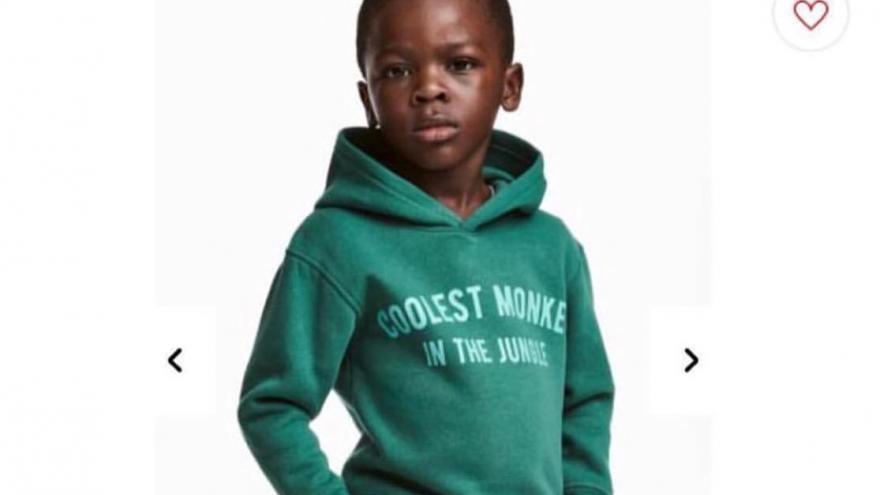 Retailer H&M is under fire after running a product photo featuring a black boy in a hoodie with the words "coolest monkey in the jungle" emblazoned on the front.

The hoodie, which was sold in the clothing chain's U.K. stores, sparked a social media backlash, with consumers vowing to stop shopping at its stores and calling for an investigation. H&M apologized for the hoodie and said it would remove the image. As of Monday morning, the hoodie is still available on its website, although the model's image was no longer posted.

"We sincerely apologize for this image," H&M said in an email sent to CBS MoneyWatch. "It has been now removed from all online channels and the product will not be for sale in the United States. We believe in diversity and inclusion in all that we do, and will be reviewing our internal routines."

The Weeknd, who began starring in campaigns for the company in 2017, said he would no longer be working with H&M after becoming aware of the photo. "Woke up this morning shocked and embarrassed by this photo. i'm deeply offended and will not be working with [H&M] anymore," the singer tweeted Monday.

woke up this morning shocked and embarrassed by this photo. i’m deeply offended and will not be working with @hm anymore... pic.twitter.com/P3023iYzAb

Among those expressing outrage were the musical artists Diddy and Questlove; Models Of Diversity, a London-based group that advocates for greater diversity in modeling and the fashion industry, and New York Times columnist Charles Blow. Others said the apology from H&M wasn't enough, given that the hoodie referred to an insensitive slur used against black people.

"And then H&M UK got the bright idea to feature a black boy model with 'Coolest Monkey in the Jungle' hoodie on its website. How on earth can this be? SHAME ON YOU!" write Models of Diversity on Twitter.

H&M isn't the first clothing company to come under fire for clothing that can be construed as offensive. Retailers have repeatedly created firestorms through graphic shirts that aimed to be funny or edgy, but instead waded into touchy gender or racial issues.

The Children's Place, for one, found itself mired in controversy when a girl's T-shirt sparked complaints it reinforced stereotypes that girls aren't interested in math. The shirt showed a checklist of "my best subjects," with shopping checked off while math remained unchecked.

As for H&M, customers vowed on its Facebook page to avoid shopping at the store and asked the company to pull the hoodie from its locations.

"They removed the picture but are still selling the item. THAT MAKES IS WORSE," one consumer wrote on H&M's Facebook page. "Now they're trying to COVER IT UP. They should be ASHAMED OF THEMSELVES."