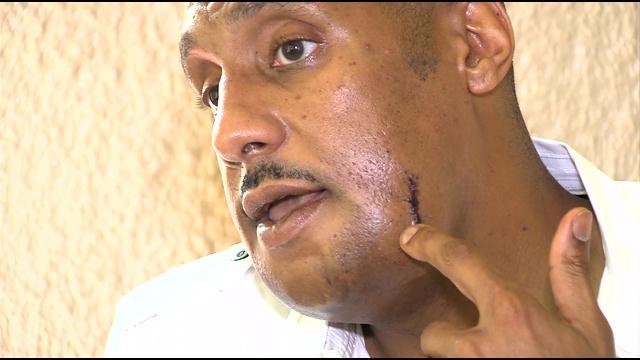 Just a little more than a year  after he was shot in the face, during an attempted carjacking, Claude Motley is back in Milwaukee to help fellow victims find their voice.

A hometown boy who has moved away, Claude Motley expected good times when he came back to visit Milwaukee for his 25th high school class reunion.

Instead, he was shot.

\"I was actually a victim of attempted armed robbery and carjacking and in that attempt I was shot in the face,\" said Motley.

For the past year he's fought for his health.

\"Gone through about five surgeries and I have about five to go. It's been a long process but when I see the support I've gotten, it's worth it,\" said Motley.

But along with his wife, has also fought to get proper punishment for the 16 year-old gunman who is now paralyzed after being involved in another crime.

\"We too often see people who don't come forward for numerous reasons maybe don't trust police or will be intimated. We need to break down those walls and have them trust us,\" said Murphy. He says Milwaukee does have help for victims and Motley is a shining example of that system working.

\"We are one of first cities in country that has a victim assistance program to help victims go through the bureaucracy of different court cases, so we have an advocate at the DA's office, who listens to individuals and makes sure their voice is heard,\" said Murphy.

Motley hopes his story will not only help victims but stop the violence.

\"They have a voice when it comes to wanting better. They want to talk to their politicians and tell the that there's something that needs to be done and needs to be better,\" said Motley.

Nathan King, the teen who shot Motley is back in court for sentencing on Thursday.