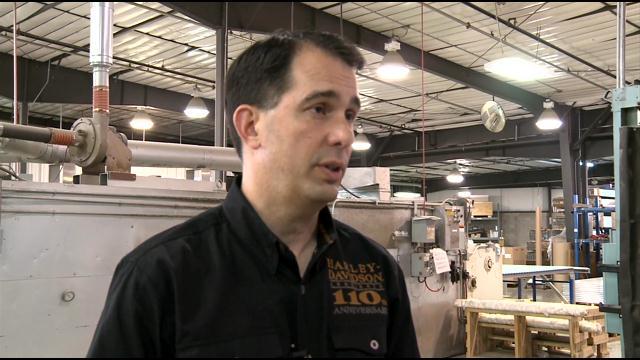 Incumbent Governor Scott Walker campaigning Tuesday and remarking on all the big democratic names coming to town to try and defeat him.

His comments came on the same day President Barrack Obama attended a fundraiser at a downtown Milwaukee restaurant and then a rally at North Division High School for democratic challenger Mary Burke.

During a stop at the Major Industries Facility with Congressman Sean Duff, Governor Walker didn't hold back.

\"Clearly y in the last few months, by all the national big government interests that have sent their presidents around the state saying I'm their number one target in America, it's pretty clear they don't like the fact that we took their power away put it in the hands of the hardworking taxpayers.\"

At the same time, the Friends of Scott Walker \"Women in Business\" bus tour began.

First Lady Tonette Walker and Lieutenant Governor Rebecca Kleefisch made several stops including some near Green Bay and Germantown.

It's part of a ten day trip across Wisconsin.

Together, they're promotion Governor Walker's record on jobs and the economy.