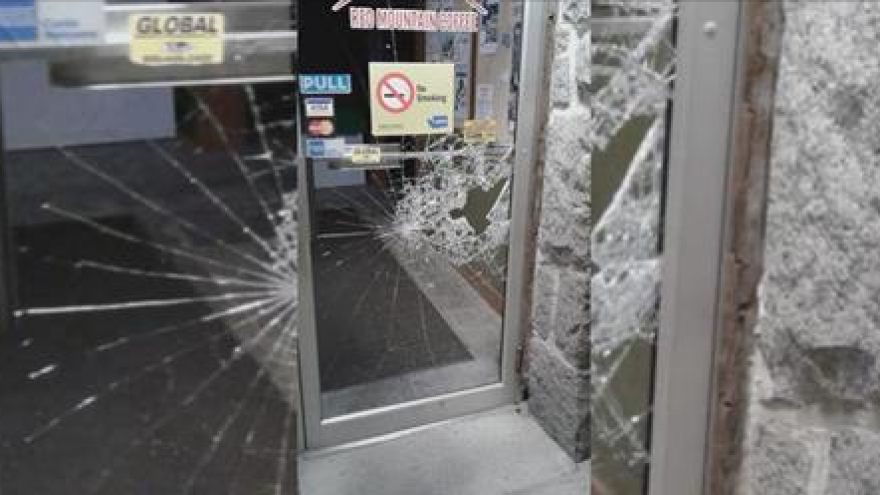 SNOQUALMIE PASS, Wash. – An Idaho woman who acted as a good Samaritan when a child was stuck inside a burning truck could face charges - all over a fire extinguisher.

“I’m in absolute shock,” said Tequila Isaacson who jumped in to help when the pickup truck went up in flames.

It happened near the Washington State Department of Transportation restroom building on Snoqualmie Pass.

On Tuesday one of the glass front doors on the neighboring Red Mountain Coffee remained boarded up after Isaacson broke the window on Sunday to gain access to a fire extinguisher.

“We turned around and the whole vehicle was on fire,” said Isaacson. “There were flames shooting between the cab and the bed of the truck - taller than the truck.”

The pickup was parked in the parking lot next to the coffee shop when it went up in flames with a child inside. The boy’s parents worked to get him out as another man called 911 and Isaacson frantically searched for a fire extinguisher.

“I ran back around from where the glass door was and I pulled a post out of the bed of my truck and hit the door to get to the fire extinguisher,” said Isaacson.

When first responders arrived, the 34-year-old told authorities she broke the glass door to get the extinguisher. But, Isaacson was stunned by what the Washington State Patrol Trooper told her next.

“He was telling me that using a fire extinguisher that doesn’t belong to me is theft and you’re not allowed to steal it, no matter how good your intentions,” she said.

Isaacson said the trooper told her she would need to pay to replace the glass on the door, or else.

“He out right stated that unless I was willing to pay for it right then and there, he would be charging me with burglary,” said Isaacson.

Isaacson said it was instinct to jump into help to try to prevent the truck from exploding before firefighters could get there.

“Talk about no good deed goes unpunished,” she said.

The Washington State Patrol said their trooper did talk to Isaacson about who would be responsible and the consequences. They said so far, no charges have been filed.

According to WSP, they will be reviewing the way this case was handled with the trooper, adding they are grateful for Isaacson’s courageous effort to help save the child.

It’s not clear why the truck went up in flames.