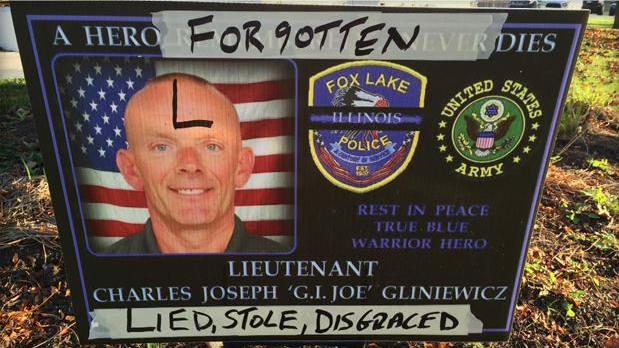 (CBSNews) Illinois - Months before an Illinois police officer staged his suicide to look like murder, prompting an expensive manhunt that put his community under siege, he tried to find a hit man to kill a village administrator he feared would expose him as a thief, a detective told The Associated Press on Thursday.

Det. Chris Covelli said Lt. Charles Joseph Gliniewicz sent a text in April asking a woman to contact a "high ranking gang member to put a hit on the village manager." Gliniewicz also texted that perhaps the hit man could "plant something" on the manager, Covelli said.

Investigators found small packages of cocaine in the manager's desk, "not linked to any case that we could find," and believe Gliniewicz may have sought to frame the manager, Anne Marrin, as a drug criminal before she exposed him as an embezzler, the detective said.

"We never found any explanation why those drugs were in his desk at the police station," Covelli said.

CBS Chicago reports that on Wednesday, Marrin said Gliniewicz threatened her as she began her audit of the Explorer program, which is used to train young people who may be considering a career in law enforcement.

Gliniewicz's wife, Melodie, and one of their sons, D.J., are also caught up in the probe, said the official, who was briefed on the investigation. The official spoke to The Associated Press on condition of anonymity because he was not authorized to discuss the investigation publicly.

The family - the couple had three other children - issued a brief statement Wednesday through their attorneys in which they said they were still grieving but which didn't mention the finding that Lt. Gliniewicz took his own life or that he had been stealing from the youth program. The attorneys, Henry Tonigan and Andrew Kelleher, didn't immediately respond to voicemail and email messages sent Thursday seeking comment.

Melodie Gliniewicz helped her husband run the Explorer program, in which he put young people interested in law enforcement careers through sophisticated training exercises. In a newspaper interview weeks ago, D.J. Gliniewicz, who is in his 20s, angrily dismissed suggestions that his father took his own life.

On Sept. 1 - the day he died - Gliniewicz radioed in that he was chasing three suspicious men into a swampy area. Backup officers found the Army veteran's body about 50 yards from his squad car.

Authorities launched a large and costly manhunt for the suspects, but the only arrest it yielded was of a woman accused of calling in a false lead. As the probe into Gliniewicz's death stretched on, suspicion grew that he had killed himself. Along the way, investigators were careful to say they continued to treat it as a homicide investigation, though they couldn't rule out suicide.

On Wednesday, investigators confirmed those suspicions, saying the 30-year police veteran meticulously staged his own suicide to make it look like he died in a confrontation with several suspects. Lake County Major Crimes Task Force Commander George Filenko, who led the investigation, said Gliniewicz had the kind of intimate knowledge of crime scenes needed to pull it off and that it was clear he did it intentionally to mislead investigators.

Investigators said they believe Gliniewicz killed himself because his criminal activity was about to be exposed. Up until the day he died, a new village administrator was pressing him to see the Explorer program's books as part of a village-wide audit.

His precise motive for trying to make his death look like a homicide remains unclear. Asked whether a suicide would prevent his family from receiving benefits, Filenko said he didn't know. Gliniewicz may also have been concerned with preserving his reputation.

"Gliniewicz committed the ultimate betrayal," Filenko said Wednesday. "We completely believed from Day One that this was a homicide."

There was a huge outpouring of grief after Gliniewicz's death in Fox Lake, the village of about 10,000 residents about 50 miles north of Chicago where the 52-year-old officer had long been a role model. That good will was replaced by a sense of betrayal on Wednesday, with public works employees cutting the blue ribbons that residents had tied to trees and poles as a tribute to their slain hero. Signs around the small town that had praised the officer known as "G.I. Joe" suddenly disappeared, replaced in one instance by a poster that labeled him "G.I. Joke."

"It's breaking my heart," said Mark Weihofen, a 41-year-old school bus mechanic. "There is a 'We love you, Joe' sign that I pass by every day. ... It was already down."

Kathy Pederson, a single mother who considered Gliniewicz a father figure to her son in the Explorer program, said she felt profound disappointment.

"You never thought he was this kind of man," she said.