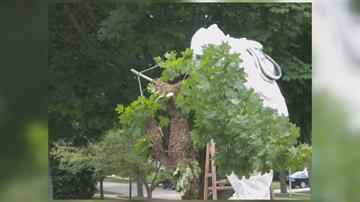 FOND DU LAC -- The sound of bees buzzing alone brings terror to some, but it wasn't a buzz that got Rosalie Otto's attention Thursday afternoon.

\"I called my husband and said, 'Come and look, there's something out here,'\" Otto said.

The retired homeowner walked out her front door to find a surprise.

\"Thousands and thousands of bees,\" Otto said.  \"They were around the tree, they were up in the sky like a funnel.\"

About 100,000 honey bees - a swarm staying put in the maple out front.  Rosalie called the police, an officer responded, but he wasn't sure what to do.  Police cordoned off the tree and hoped the bees would leave by morning.

\"You think of killer bees,\" Otto said.  \"I didn't want to get close because I thought, 'Well, if they sit on you they're gonna sting and it's gonna hurt,'\" Otto said.

By the weekend the bees were still there, hanging low enough for kids or people passing by to touch them.  Police called in the Fond du Lac Fire Department and Lieutenant Todd Shippee suited up.

\"I'm a lot more afraid of a fire than I would be of a swarm of bees,\" Shippee said.

The veteran firefighter happens to be a beekeeper too.  Shippee trained with how to handle the insects five years ago and brought that training to his firehouse.

\"That is a lot of bees and if they were aggressive or attacked, it would be lethal,\" Shippee said.  \"But they normally won't attack if you leave them alone.\"

Shippee worked to remove the ten-pound swarm and took the bees to his hives outside of town, completing a safe operation without any stings.

\"When you run out of resources and you don't know who else to call, just call the fire department,\" Shippe said.  \"We're prepared for any type of emergency.\"

Lt. Shippee says it's important not to kill honeybees.  It's not illegal in Wisconsin, but Shippee says honeybees pollinate about 50 percent of the crops we survive on.