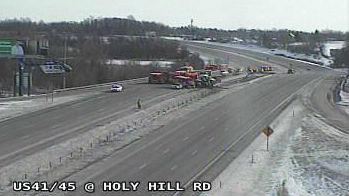 All lanes of traffic at Highway 41/45 have reopened after a major crash at Holy Hill Road.

The highway was shut down for 4 hours Wednesday afternoon.

Police tell CBS 58 News that a woman had a medical emergency and crashed into a guardrail around 2 p.m.

The car behind her stopped, the driver got out and that's when a dump truck driver that didn't notice the cars slowing down plowed into several vehicles sending them pummeling into the women.

\"All I can say is that they had a very complicated and messy accident on their hands,.\" explained Lt. Dave Huesemann of the Germantown Police Department. \"Getting out of the vehicle on a highway during preliminary rush hour, can cost you your life.\"

Delays were reported in excess of 3 miles during the incident and motorist were encouraged to use alternate routes.

While officers were dealing with the crash another accident occurred at Pilgrim Road and Sylvan. Two people were injured in that two-vehicle crash.

This latest crash is an eerie reminder of a massive 30 car pileup in December of 2013. Drivers got out of their cars after they crashed and nearly were hit again.

In December of 2014 two semi-trucks collided with fatal results.

Officers say winter weather, a curve in the road and a slight hill may have lead to a 10% increase in crashes in this same stretch of roadway over the last year.

A preliminary investigation shows the dump truck driver may not have been paying attention.

A final ruling on a cause could take months.

\"It seriously takes a split second for you to check a text on your phone, look down because you dropped something in your car, and you're in a multiple car pileup.\"