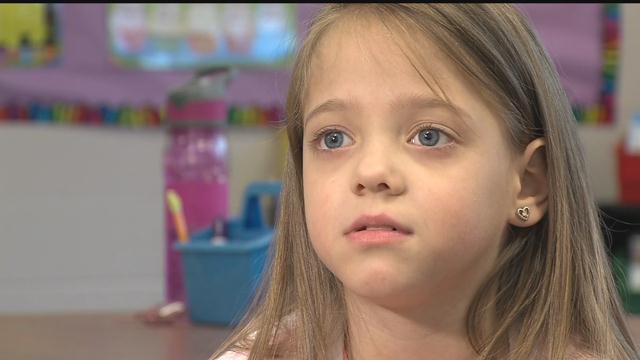 Teachers give a lot to their students. But Oakfield Elementary School that statement is a bit of an understatement.

A first grader will be receiving a life-altering gift from one of the staff members there: a kidney.

8-year-old Natasha Fuller is the recipient and if you were going off her personality and energy level you'd never know she was ill.

But when Third grade teacher Jodi Schmidt learned how bad the situation was for Fuller, she said she realized she had to do something.

Fuller has end stage renal failure - her kidneys don't work properly. She currently has to goes to dialysis three times a week. The tubes inserted into her body prevent her from doing the things she wants to do.

"Sometimes some people don't have a match for you. And sometimes you try to look for a match but you can't find one," Fuller said.

So why did the teacher - Mrs. Schmidt - start the process?

"I really don't know. I knew she was sick for well over a year and I didn't do anything until that day. It really truly just came to me like, I'm going to give her a kidney," Schmidt said.

She said she was in her car when she made the decision. She immediately called her husband.

"I was probably getting supper ready for the kids or something and she called and said 'Hey, I think I want to donate a kidney'. And I'm like 'Okay, let's back it up a little bit', Richard Schmidt, Jodi's husband, said.

"He's like 'Okay'. I have some random thoughts sometimes so I don't know if he thought I was really serious at first. But then we got everything started and he was very supportive," Jodi Schmidt said.

Staff at Oakfield Elementary School took video of the moment Jodie revealed to Natasha's grandmother that - yes, she is a donor match...

...And - yes, she would be going through with the donation.

"She's a wonderful person. Amazing. I mean selfless. I mean, just an amazing person. Her and her husband and her family are now our family. forever," Chris Burleton, Natasha's grandmother, said.

"I'm so excited for [Natasha] to have a happy life. Just be free and be the little one she is," Schmidt said.

And little Natasha Fuller - who's still coming to fully understand the situation - said she's looking forward to the surgery.

"Yeah but I don't know when because I'm just a little kid," Natasha said.

The surgery does not yet have a hard date schedule. Natasha is dealing with a slight infection that has to clear up before it can happen, her family said.