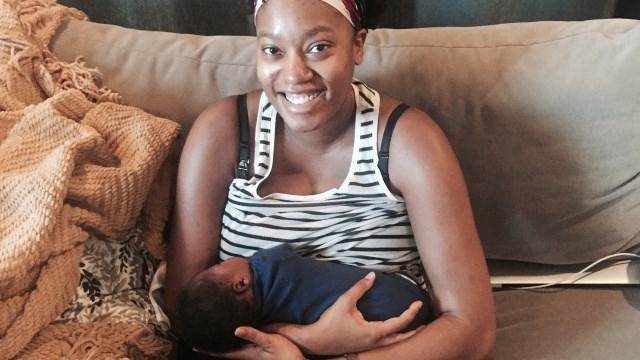 SAN FRANCISCO (KCBS) – A San Francisco couple didn’t plan on having their baby at home, but their daughter had other plans. Their “What to Expect When You’re Expecting” book came in handy, but in an unexpected way.

on delivering his baby girl Noemi.

“I’m a software engineer, I work in tech. I’m that guy, like the furthest from a healthcare professional

as you can get,” Rogers told KCBS Radio.

His wife, Aniyia Williams also works in tech. The pair used an app called “Full Term” to track the contractions.

“Whenever I would have a contraction, I would say the word ‘banana.’ And Marco would have the phone, and he would start the timer. And then if I said banana again, he would stop it. So that’s how we were tracking it, all day with this app I had on my phone,” Williams said.

The tracking got off track, when her water broke and the

“I just like dropped to the floor…this is going down,” Williams recalled.

Rogers and William’s father, who was also home at the time, tried to do what they could.

“Her dad called 911. I looked at him, he had his phone out, and I knew he was going to do that,” Rogers said. “And she told me to go find the ‘What to Expect’ book, because it had that emergency section on delivering”

Williams had gone back upstairs to the bedroom. And Rogers, who didn’t have time to read and who was initially squeamish about cutting the umbilical cord, delivered his daughter.

“It is indeed true. Brand new humans are very slippery, you have to hold onto them.” Rogers said.

When the EMT’s arrived, they offered a scalpel for Rogers to use to cut the cord. A hard surface was needed, so he cut the cord atop “What to Expect When You’re Expecting.”

“I tried to get him to torch the book, but he’s like ‘No, we have to keep this.’ And I said to put it in a Ziploc bag and get it away from me,” Williams said.

After the birth, Rogers tweeted about the entire experience and it took off on social media.

The native San Franciscan, born unexpectedly at home, has a nickname reflective of her hometown, Noe.
Share this article: