'Fantastic Four' reviews are anything but 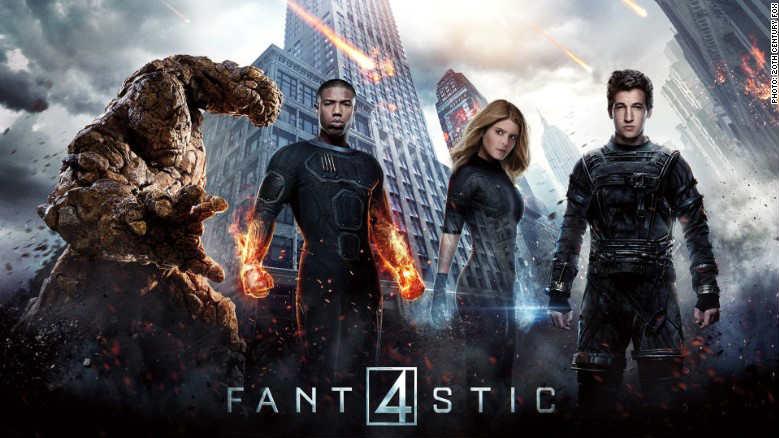 Or maybe \"4\" is supposed to represent the approval rating on RottenTomatoes.com.

The big-budget film about the Marvel team, which stars Miles Teller, Kate Mara, Michael B. Jordan and Jamie Bell, is actually pulling a 9% rating on the review-aggregation site Rotten Tomatoes as of Friday morning, but that's not saying much. Critics have plenty to say, however -- and, perhaps surprisingly, so does director Josh Trank (whose luck is currently so dismal that he was misidentified as \"Josh Trask\" in a tweet).

But first, over to the critics:

Joe Neumaier, New York Daily News: \"A self-destruct mode is apparently automatically included in any film adaptation of Marvel's 'First Family of Superheroes.' This is the third attempt at a movie franchise -- and the third lame result.\"

Peter Travers, Rolling Stone: \"The latest reboot of the Fantastic Four -- the cinematic equivalent of malware -- is worse than worthless. It not only scrapes the bottom of the Marvel-movie barrel; it knocks out the floor and sucks audiences into a black hole of soul-crushing, coma-inducing dullness.\"

A.O. Scott, The New York Times: \"The human drama is meager. Once again, the only real pathos belongs to Bell's Ben, who finds himself trapped in a stony new body and weaponized by a ruthless government. Teller stretches, not as an actor but as a digitally enhanced body. Jordan burns in the same way, and Mara disappears. Her character also has the power to make other things vanish. I would say she should have exercised it on this movie, but in a week or two that should take care of itself.\"

Todd McCarthy, The Hollywood Reporter: \"Near the end, Teller's Reed comments on the status of the group's actions by proclaiming, 'We opened this door, we're gonna close it.' The sooner the better.\"

The film does have a handful of supporters, though their praise can be considered lukewarm at best.

\"Fans will be disappointed by the missed opportunity to establish continuity with Fox's other super-properties ('X-Men,' 'Deadpool,' etc.) -- and no post-credits scene? But they'll be happy to see the realistic, more grown-up tone of this film,\" wrote the San Francisco Chronicle's Michael Ordoña.

And Baret News' Kam Williams added, \"(It's) a decent enough overhaul to recommend heartily as a pleasant escape from the hazy, hot, humid dog days of August.\" (As long as your movie theater is healthfully air-conditioned, we guess.)

But perhaps the most interesting assessment came from Trank himself, who struck back at the reviews by saying he had a \"fantastic\" version of \"Four\" in mind when he started. His tweet was quickly deleted but naturally had been captured for posterity.

It hasn't been a good year for the 31-year-old director, who got good reviews and box office for his debut feature, 2012's \"Chronicle.\" In May, he left the planned \"Star Wars Episode VIII,\" saying he was \"making a personal decision to move forward on a different path,\" though -- Hollywood being Hollywood -- others told a different story.

Regardless, \"Fantastic Four\" is now in the theaters. And if it doesn't do well, the Boston Globe's Russo does have a solution.