Family, supporters march and rally to mark one year of Dontre Hamilton's death 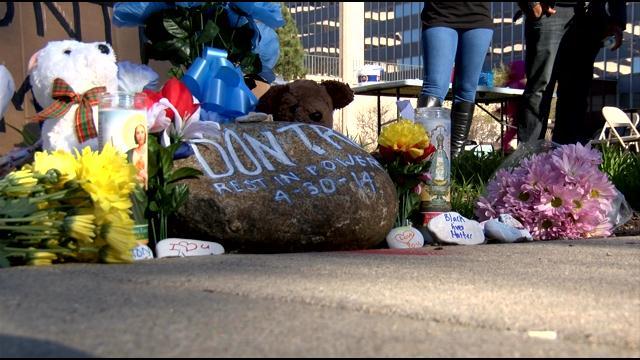 It's been one year since Dontre Hamilton, 31, was shot and killed by former Milwaukee police officer Christopher Manney 14 times in Red Arrow Park.

The Hamilton family, as well as supporters, peacefully marched through the city's streets to mark the somber anniversary.

\"I feel drawn toward standing up with them because it's not right what happened,\" said supporter Michelle Wood.

But what is right, is celebrating the life Dontre lived. Hundreds of people filled the downtown park with love and peace, in hopes of one day bringing about change and justice.

\"I have hope because Dontre's blood is in this park,\" said his mother, Maria Hamilton.

A smile forever captured on t-shirts by supporters young and old. They rallied peacefully together, leaving words of encouragement on a banner and adding flowers and rocks to a nearby memorial.

Wood said, \"I left a rock that says let justice roll because I feel it's a part of my faith to be working toward justice and dismantling discrimination in our community.\"

Milwaukee police looked on from afar and worked with the family to make sure things went smoothly, as the Hamilton's continue lead the charge for equality.

Maria is preparing for the Million Moms March in Washington, D.C. on Mother's Day. She leaves Milwaukee on May 7th for the rally that aims to support mother's whose unarmed children have been killed by police.