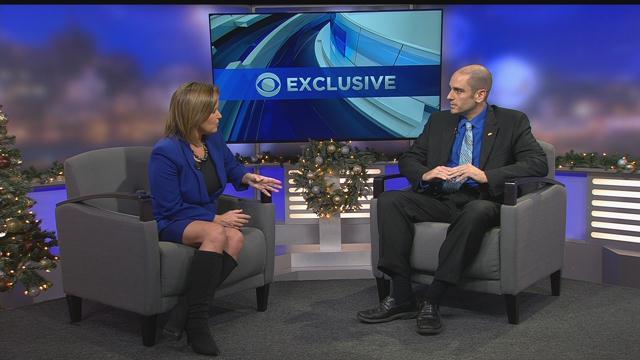 West Allis Mayor Dan Devine was sounding optimistic about the future of the city in an exclusive, live interview Tuesday with CBS 58 News.

His sit down interview comes just one day after the Fire and Police Commission announced the selection of Patrick Mitchell to take over as police chief in January.

Mayor Devine has not met the former Milwaukee Police Department Assistant Chief. That's because West Allis leaves the decision on police matters up to the commissioners the mayor appoints.

Not every city in the state gives such powers, but Devine believes it works for West Allis when it comes to hiring issues, budget decisions and investigating complaints.

"It's got its detractors and fans," Devine told CBS 58's Michele McCormack . "It does take the politics out of the process."

While Mayor Devine appoints the Commissioners, who are approved by the council, he doesn't micromanage.

But Devine will push for Chief Mitchell to improve public relations for the community of 60,000.

"I think that having a strong  rapport with community is huge."

This has been a challenging year for West Allis which has had to deal with detours related to the Zoo Interchange reconstruction project.

"It's been headache after headache," admitted by the Mayor.

He believes the Department of Transportation has tried to address concerns with changing the timing of traffic signals.

When asked if he thought the DOT was doing a good job in being responsive to those concerns Devine responded "Overall yes. We went into this realizing that it wasn't going to be painless. We've had to change parking regulations. Add turn arrows. By and large they've done a nice job."

Mayor Devine is especially excited by the new development that's going and the array of restaurants and specialty shops that some hope will make West Allis a destination like Bay View.

Recent expansions of the West Allis Cheese and Sausage Shoppe and the return of Crawdaddy's Cajun all bode well for West Allis in his mind.

He also pointed out that Chef Paz Peruvian is drawing in customers from as far as Madison and Chicago.

Devine also pointed out that if ever there was a sign of promise with the young people, the skate park at 84th and National is it.

A lot of the skaters have essentially adopted it by having clean ups and shoveling the snow in the winter.

"I often see older kids teaching younger kids when I drive by."

West Allis has  6 developers that have submitted proposals to redevelop the parcels near the Farmer's Market next year.

The Hampton Inn has opened up across from State Fair Park.

And there's another proposal for high end apartments at 84th and Greenfield.

Mayor Devine's live interview is attached to this story.