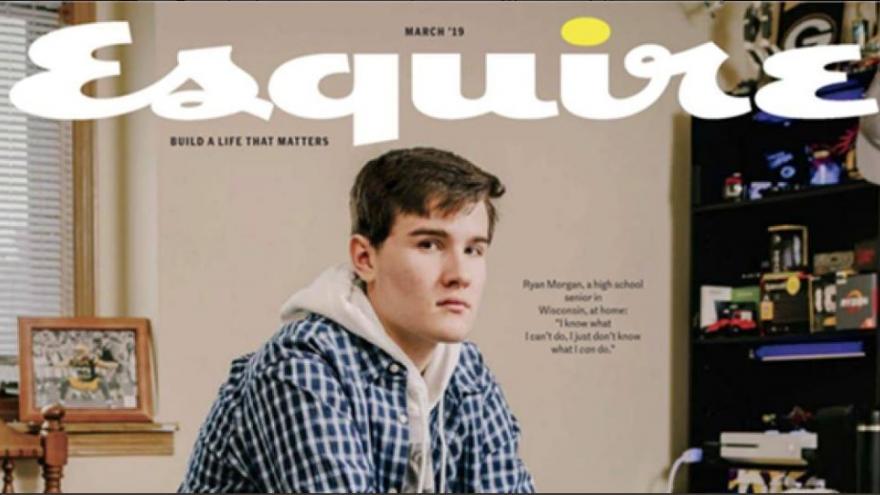 WISCONSIN (CBS News) -- Esquire magazine dropped the cover story for its March issue on Tuesday, and many people expressed their frustration with the 17-year-old boy profiled in the article. The author of the cover story, Jennifer Percy, says the presentation for her feature story was "misleading."

"The Life of an American Boy at 17" follows Ryan Morgan and, according to the cover, "what it's like to grow up white, middle class, and male in the era of social media, school shootings, toxic masculinity, #MeToo, and a divided country."

In an email to CBS News, Percy wrote the "article shows how much work we still have to do to educate boys about inherited white male privilege. It also shows that the teenage years are an ideal time to make change."

Several social media users were outraged that the magazine would release a story that highlights white males during Black History Month. Many people pointed out that Esquire's profile gives a voice to a subject that is often represented in America media, instead of an underrepresented individual. "I did not approve the cover image or cover text and found the presentation misleading," Percy wrote.

While the profile of Morgan is just part one in a series growing up in America today, many felt the magazine missed the mark in choosing the "typical American boy." Others felt the magazine was sympathizing with white men and "what they have to go through" in today's political climate.

Morgan, who grew up in the middle class town of West Bend, Wisconsin, has conservative parents, doesn't exactly know what the #MeToo movement is, and is still confused about what he can and can't do, the interview reveals. Some readers felt the profile was not thought-provoking and that its white male point of view was a questionable choice to promote during Black History Month.

In an editor's note, Editor in Chief Jay Fielden said that 26 years after the magazine profiled the daily life of a 10-year-old American boy, they decided to "follow that model but to enlarge it into a series on growing up now — white, black, LGBTQ, female — that will continue to appear in coming issues." The first installment, by Percy, looks at the divided country through the eyes of one kid, Fielden writes.

"He's white, lives in the middle of the reddest county in Wisconsin, and, as you will see, he is an unusually mature, intelligent, and determined young man," Fielden's note on the story read. "I'd like to thank Ryan here for the time he spent with Jen and photographer Justin Kaneps. He may be only seventeen — and as infallibly human as the rest of us — but I admire the courage he's shown in speaking with us so openly about his life, and for agreeing to be on our cover."

In the profile, the teen admits he isn't well versed in women's rights, but says he identifies as a conservative-leaning moderate, and shared his opinion on several other social and political issues.

"On issues of gender, Ryan is mixed. He doesn't think abortion should be legal. He doesn't support condom distribution in high schools to prevent pregnancy. If a man and a woman earning the same salary have a child, and if one of them must quit their job to raise it, Ryan thinks it should be the woman. But he supports marriage equality and the right to enlist in the military regardless of sexual orientation," Percy writes.

Some people thought releasing the now-controversial cover was a strategy to get people talking about Esquire's continuing series, which will later profile other, more diverse people. Some defended Esquires choice in subject, saying Morgan is, in fact, the typical American boy.