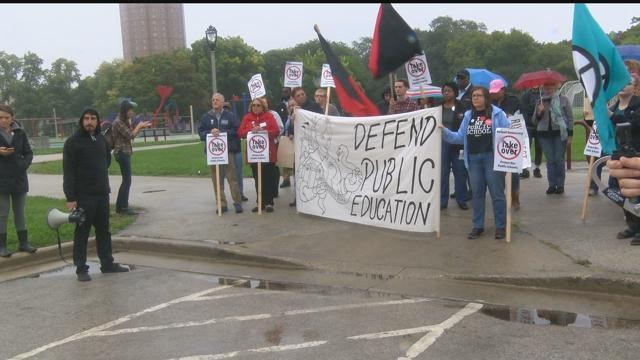 Dozens of residents in Milwaukee's Riverwest neighborhood protested the possibility of an all-boys military school.

It's a plan many believe, will leave children hanging in the balance.

Jenna Loyd is one of dozens of neighbors who oppose a plan that would force the sale of a vacant MPS building to become an all-male military-based voucher school called Right Step.

"Right Step is under investigation by the FBI for abusing the children whom they're supposed to be teaching. That is a huge concern for me," she said.

Nearly 40 protesters marched from Gordon Park, to the vacant building on Center street chanting for change.  Instead, they're calling for a stronger public school system.

"What I know, from teaching children is that what they need is nurturing," said former teacher Wendy Turk.

"What benefit can there be? You're marching kids down the street, back and forth in the middle of the day over to the park to have military exercises. Come on," said neighbor L. Spike Bandy.

A decision on whether the plan moves forward is set for next week.