Disabled Veteran, Beaten for Trying to Save Turtle's Life, Gets Big Surprise 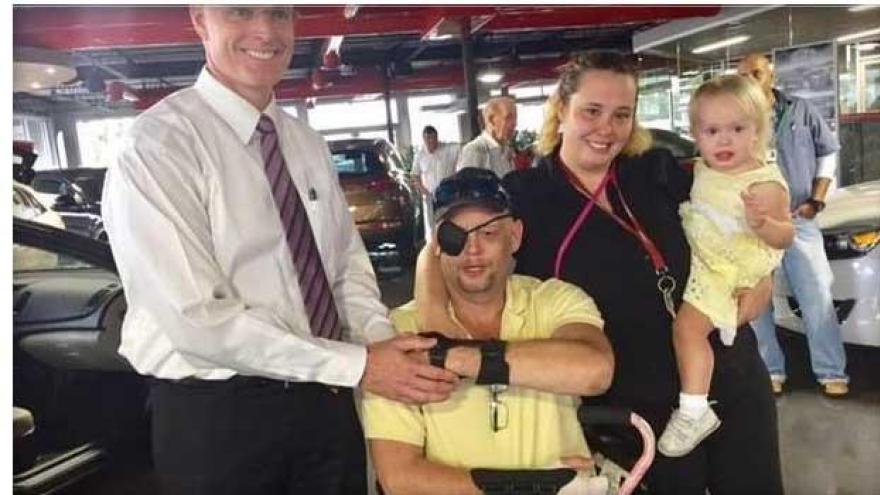 (CBS NEWS) A disabled Navy veteran was given the surprise of a lifetime on Wednesday — nearly a week after police said the 45-year-old was beaten by three men after he asked them to stop torturing a turtle in Daytona Beach, Florida.

“Here’s a guy that’s trying to stand up for some defenseless animal and he ends up getting beat up,” Nisbett told CBS News. “He was taken to a hospital from a beating that shouldn’t have happened. He had to walk home with his walker — I mean, I just couldn’t take it. I wanted to do whatever I could.”

Salespeople and customers crowded around Blough as he made his way into the car dealership Wednesday. He was in a wheelchair, wearing an eye patch and wrist braces, and had a cane in hand.

Nisbett thanked the man for his brave actions, and both of them got emotional as Blough tested out his new ride.

“He was choked up as I was, and just couldn’t have been more appreciative,” Nisbett said. “It just felt like the right thing to do.”

Blough’s wife, Jennifer, created a GoFundMe page after the incident to help cover medical expenses and pay for a rental car to transport the family and their 1-year-old daughter to and from doctor appointments.

“My husband Garry now has to have surgery on his eye,” Jennifer explained. “And another major surgery. He has metal in him from the war in 1991.”

Thousands of people rallied around the family, and within 7 days, they had raised more than $32,000.

“Thanks for helping those who can’t help themselves,” one donor wrote.

“Thanks you for helping a defenseless creature,” another added. “You restore my faith in humanity and you deserve the best.”

Blough was outside his apartment complex when he said he saw a group of three men torturing a turtle last week, reports CBS affiliate WKMG. One of the men, identified as Johnnie Beveritt, 18, picked up the turtle and threw it down on the sidewalk; the two others, Ryan Ponder, 23, and a 16-year-old whose name was not released, kicked the turtle toward the apartment building, Blough told the news station after the incident.

Blough says when he told them to stop, they attacked him. First responders said Blough suffered injuries including broken skull and facial bones, internal bleeding and a concussion.

The turtle was later found dead. All three men were charged with aggravated battery and animal cruelty.

Blough said he doesn’t regret standing up for the animal.

“I would take the beating I got again if it meant saving that turtle,” Blough told WKMG.