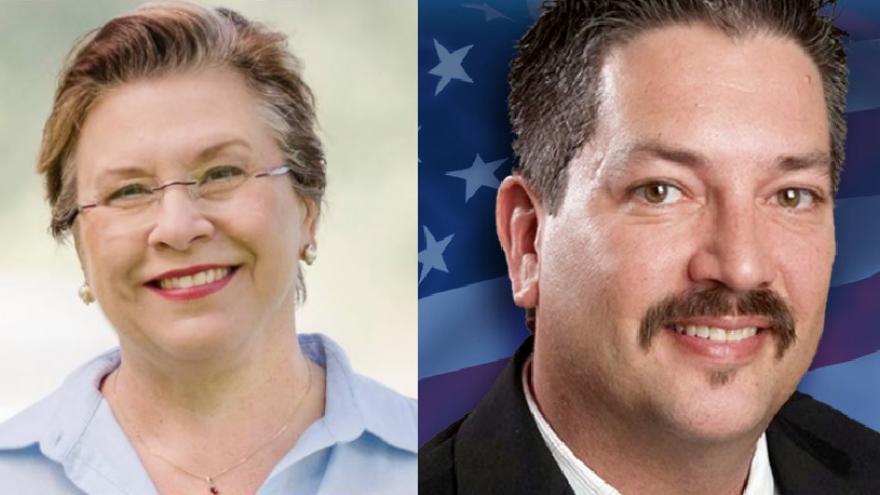 OSHKOSH, Wis. (AP) — Democratic candidates running to replace Republican House Speaker Paul Ryan in Congress called for party unity Saturday to capture the southeast Wisconsin seat, a victory they argued could be key to flipping majority control of the House.

Union iron worker and Army veteran Randy Bryce, who goes by the nickname "Iron Stache," has been named to the national House Democrats' list of top challengers in Republican-held districts. While he leads in fundraising and organization, Janesville teacher Cathy Myers has mounted a spirited primary challenge and argued that a "progressive woman" was needed to win the seat.

Six Republicans filed to replace Ryan after he announced in April he would not seek re-election after 20 years holding the seat. Former Ryan aide and University of Wisconsin Regent Bryan Steil, a corporate attorney, is seen as the front-runner based on his organization, fundraising and endorsements. Both Bryce and Myers attacked Steil in their speeches to about 1,000 Democratic activists, while also arguing why they are the better choice to take him on.

Myers said Steil will be a "rubber stamp" for President Donald Trump, just as she argued he is for Republican Gov. Scott Walker as a UW regent. Bryce described Steil as Ryan's "hand-picked replacement."

Bryce argued that it was time for a blue collar worker like himself to hold the congressional seat that includes traditionally Democratic cities like Janesville and Kenosha, once home to large automobile plants that are now shuttered.

"We need a working person standing up for other working people," Bryce said.

"Our opponents are wasting no time in lobbing false attacks, but it's nothing more than political chatter that Wisconsinites are sick of from politicians," Iverson said. "Bryan's campaign is about addressing the issues Wisconsinites care about, like the cost of healthcare, creating new jobs, and an out-of-touch federal government."

Bryce's national support, fueled by a catchy campaign launch video that played off his "Iron Stache" nickname, has led to him raising about $5 million for the race. He had nearly $2.3 million cash on hand at the end of March while Cathy Myers had $177,000. Steil said he raised about $250,000 within three days after launching his candidacy in April.

"Nothing about my story is unique," Myers said. "I'm one of hundreds of Democratic women running for office in 2018 because we will not be ignored."

Without mentioning one another, both Bryce and Myers urged fellow Democrats to unite to win the seat. The primary is Aug. 14.

"This fight is far from over," Bryce said. "Together we repealed Paul Ryan, but I'm going to need everybody in this room to replace him."

Trump won the narrowly Republican district by more than 10 percentage points while winning statewide by less than a point. In April's election for an open Wisconsin Supreme Court seat, the conservative candidate won the district by over 5 points while losing statewide by 12. The last time it went Democratic in a presidential election was when Barack Obama carried it by 3 points in 2008 before redistricting made it a little more Republican.

Democrats must net 24 Republican-held seats to regain the House majority.

Bryce's endorsements include liberals like Vermont Sen. Bernie Sanders and NARAL Pro-Choice America, while Myers has the backing of the National Organization for Women.